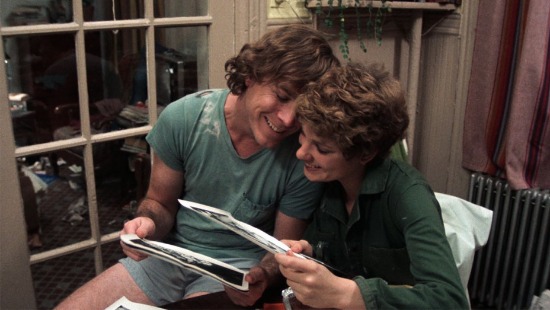 "Between the Lines" qualifies for COFF status -- Criminally Overlooked or Forgotten Films, the unofficial series I've long noodled with to spotlight movies most people have never heard of. It's not a great film, but it is a very good one and, more importantly, it's an interesting one, both culturally and in terms of cinematic history.

It recently got a handsome Blu-ray reissue from Cohen Media Group that's definitely worth checking out.

It was the second feature helmed by Joan Micklin Silver, a female director when there weren't many people who could say that. She made a small splash two years earlier with "Hester Street," a story about turn-of-the-century Jewish immigrants that earned Carol Kane a Best Actress Oscar nomination. Silver would go on to direct "Chilly Scenes of Winter," "Crossing Delancy" and "Loverboy," among others, and worked steadily into the early 2000s.

"Between the Lines" is a movie about journalism but also how the counterculture of the 1960s morphed into complacency during the '70s. It's a snapshot of Baby Boomers as they embraced the full adulthood of their middle- to late-20s, in much the same was as "The Big Chill" caught them a few years later settling down and "Grand Canyon" ruminated on their middle years.

The setting is The Back Bay Mainline, an alternative weekly newspaper in Boston that began in 1969 as a rabble-rousing call to arms -- student protesters turned journalists. Seven years later with the Vietnam War over, the Mainline is going through an identity crisis, along with its newsroom staff. Most readers now consume it for its cultural coverage of rock music and film, along with a few investigative pieces that don't punch at the same level as they used to.

The film quintessentially captures the spirit of the alt-weekly culture -- cramped offices piled high with old papers and files, movie and concert posters, a rabbit warren of constant activity and heady interaction.

Nobody is married or has kids, so the paper becomes everyone's de facto family. They bicker and smoke joints and sleep around with each other, and also do some reporting.

Silver had once worked for The Village Voice, and screenwriter Fred Barron was a veteran of The Phoenix and The Real Paper, so the story sings with the authentic voice and rhythm of this world. Like "Bull Durham," it's the sort of movie that you can tell comes from a place of not mere observation but lived experience.

I never worked at an alt-weekly, though I had friends who did and got a few pieces into weeklies in Orlando and Indianapolis, and hung around their offices enough to feel the vibe. I also started at a small community weekly that we eventually turned into a daily: they doubled the reporting staff when they hired me.

Our office was in a (slightly) refurbished paint storage warehouse, the taint of turpentine still lingering. There wasn't even a newsroom per se, the reporters having desks in the hallway on the way to the sales department. I worked 70 hours a week for $17,000 a year, barely above the minimum wage at that time. I won't say I loved every minute of it, but I learned a lot of about journalism and about life.

The Mainline is successful, which is to say it has a presence in Boston -- at least the seedier parts -- and rumors of it being bought up by a larger media outfit are constantly in the air. The staff works for virtual slaves wages, though.

(Some things never change, the newspaper racket being very remunerative for owners and executives, not so great for journalists who eventually want to buy homes or send their kids to college.)

Max Arloft, the zany rock music critic played by Jeff Goldblum, probably has the biggest following at the paper but only takes home $75 a week. By his own reckoning he doesn't work very hard, but it's still less than minimum wage for an ostensibly full-time gig.

Max tools around in a mechanic's jumpsuit underneath a bright red sports jacket, hitting people up for drinks or joints or a few bucks. Both parties are aware of the true nature of these "loans." He's not above dropping his name at a bar to strangers if it'll get him a free beer.

There's a wonderful scene where Max is giving a tired talk to some college coeds on the future of rock 'n' roll, and the real purpose of the endeavor is so transparent that he finally gives up and just announces his phone number to the rapt women.

The star of the paper, or at least he thinks he is, is Harry Lucas (John Heard), the chief investigative reporter. He won a big award a few years ago for a series on poor conditions at nursing homes, but nothing much really changed and he's mostly skating on past glory these days. His chief rival for top dog status, Michael (Stephen Collins), left the paper a few months ago to work on a book, and Harry is clearly tempted to follow.

Michael is sponging off of his girlfriend, Laura (Gwen Welles), a columnist, living at her apartment and making her take care of his dog while he whacks away at a typewriter all day. A smooth WASP-y presence, Michael has already given up untucked plaids for oxford shirts and sports coats with jeans, a look reputedly pioneered by Lorne Michaels of "Saturday Night Live" fame that bridged the gap from hippie to yuppie.

About halfway through the movie, Michael sells the rights to his book and immediately transforms into (or is finally revealed as) an egotistical sellout, reveling in being the center of attention and chatting about "the movie rights." In another 20 years he'll be a talking head on cable TV news.

He automatically assumes that Laura will move with him to New York to carry on the duties of supportive significant other, while also beneficently opining that the Mainline could use a Big Apple perspective column.

Lindsay Crouse is Abbie, the chief photographer and on again/off again girlfriend of Harry. She's clearly in charge of their relationship, and it irks Harry to no end. With his schleppy hair and cute-guy glasses, he's the sort of person to knock committed relationships while desperately wanting one. Abbie pops over to his place one night to sleep with him, ignores him when Harry says he loves her, and is out dancing with other guys the next day.

"Between the Lines" is illuminating for its portrait of male/female relationships in the 1970s -- personally, professionally and where those two areas blur. There's a constant refrain of the men talking over the women, or even substituting their own voices: "I think what Laura really means is..." The women vary between craving independence and their own identity (Abbie) and knuckling under after a fit of rebellion (Laura).

In the latter case, this means Laura going home with Harry after she feels ignored by Michael, leading to an awkward bedroom encounter. It seems pretty obvious the two men are just using Laura as a tool to hash out their own antagonism.

The other notable female character is Lynn (Jill Eikenberry), who acts as secretary/central hub/den mother at the Mainline office. There's a terrific scene where the three women hang out together, dancing and fretting about boys but also the dynamic of the newspaper and its mission.

(Thus meeting the standards of the useful-but-often-misleading Bechdel Test.)

We get the sense that Lynn started out as another one of the writers but ended up shouldering the administrative duties because no one else wanted to. She is in many ways the true soul of the newspaper. When push comes to shove and the Mainline is finally sold to the minor media baron Roy Walsh (Lane Smith) -- who is perfectly willing to can the entire editorial staff unless they toe the line -- it is she who preempts him by quitting first.

The hard-charging true believer editor, Frank (Jon Korkes), who talks a good game about the importance of a free and independent press, cans Harry at Walsh's directive rather than "adding my own job to the pile." The rest seem to swallow this, and the paper's transformation from rebel iconoclast to quirky product of the mainstream is complete.

Other background players include Joe Morton as Ahmed, a jovial and flirty presence; Lewis J. Stadlen as Stanley, the buttoned-up sales manager who clashes with the reporters while secretly wanting to be part of their crowd; Michael J. Pollard as The Hawker, who sells the paper on the streets and sleeps under a pinball machine at the office, essentially acting as their mascot; and Bruno Kirby as David, a timid young reporter who wants to follow in the footsteps of Harry and Michael.

The movie doesn't focus on the process of journalism much, though I liked the portrayal of a rambling budget meeting where that week's stories are pitched. Harry works half-heartedly on a piece about sex workers, where we meet Marilu Henner as a surprisingly self-aware stripper. She and Abbie end up bonding, and Harry is annoyed that the photographer asks far better questions than his.

The only other story we really follow is David attempting to expose a local music promoter as the source of a lucrative series of bootleg tapes. Max already knows who it is, but is too lazy to do anything with it.

There's a fair amount of sex and skin in "Between the Lines," and trailers for the movie play this up pretty heavily. Welles has a sexy scene where she emerges nude from the shower and begins to apply makeup in the kitchen mirror where Michael is working, then pretends to be surprised when he reacts lustily.

Goldblum is also an earthy, charismatic presence as the hedonistic Max. At one point he is beset by a pair of groupies both named Annie. Later he engages in some butt-bumping dancing with them as Southside Johnny Lyon croons the night away, which is perhaps the film's most iconic moment.

Smart and sexy, "Between the Lines" reminds me a little of "Everybody Wants Some!!", a recent film I absolutely adored. At first glance it doesn't seem to be about much of anything, until you realize it's a  little bit about everything.