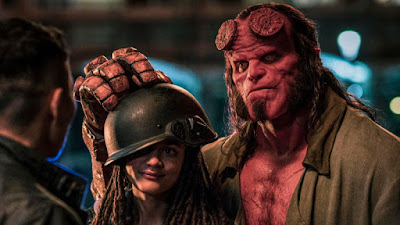 A reboot of the “Hellboy” franchise seemed doomed from the start, but intriguing.

After all, the two movies directed by Guillermo del Toro based on the comic book antihero did not exactly smash down any doors at the box office. And while many people are fans of them, I am not. They fall into the classic “better idea than the movie they made” category. When the studio couldn’t get GDT to commit to a third film, and star Ron Perlman said he wouldn’t appear without him, that led to a predictable reboot pathway.

When I heard it would be R-rated and feature Milla Jovovich as an ancient evil sorceress, and star David Harbour of “Stranger Things” fame as the titular devil-turned-hero, it seemed a sufficient enough departure to warrant granting a wait-and-see pose.

Then I saw. Hoo boy.

The 2019 “Hellboy” is a whirring sink disposal of a garbage movie. Literally nothing about it works. It’s not funny when it’s clearly trying to be, and hilarious when it wants to be serious. Harbour’s take on the character is somehow both grating and forgettable. It’s a pale shadow of Perlman’s laconic, zero-f-words-to-give turn.

Screenwriter Andrew Cosby and director Neil Marshall rehash Hellboy’s origin story, in which he was summoned by Nazis to unleash hell on earth but rescued by kindly Brits and turned into an investigator/hatchet man by the Bureau for Paranormal Research and Defense.

He’s still got that cool look: fire engine red skin, forked tail, sanded-down head horns and an oversized right arm that’s basically a stone piledriver. Part action hero, part exorcist, Hellboy finds himself betrayed by those he serves and tempted by apocalyptic visions in which he wields the ultimate power.

The story is a confusing web having to do with the Blood Queen (Jovovich), who was seemingly slain by King Arthur a millennia ago, returning to cast her dark arts again. There’s also a jaguar lycanthrope, a trio of ugly giants and other typical fantasy film beasties.

Weirdly, the thing I most remember about the movie is Harbour repeatedly moaning in pain whenever he’s beset in combat. Even seemingly trivial episodes, like sliding down a small slope, sets off another round of bleating.

It’s one thing to have your superheroes exhibit some vulnerability, but this “Hellboy” wears – and yells – his failings for all to see.

Bonus features are anchored by an expansive three-part making-of documentary “Tales of the Hunt: Hellboy Reborn.” There are also deleted scenes and previsualizations of some of the FX heavy scenes.