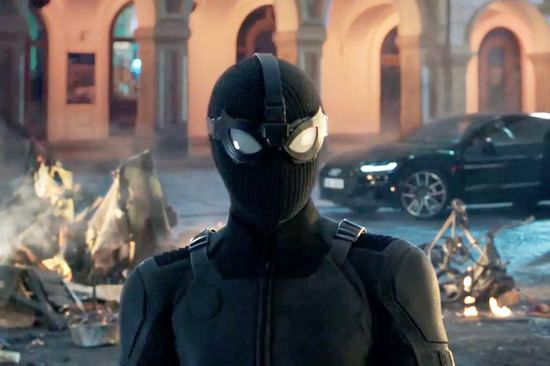 I have received stern warnings not to hint at the “big reveal” in “Spider-Man: Far from Home,” so I won’t. All I’ll say is that if you can’t see it coming, then you must be new to the movies.

There are a couple more twists that are a bit harder to see, so stick around for the end credits for all the little Easter eggs.

This is the least consequential of all the Marvel Comics Universe (MCU) films. It’s lighthearted and feels like the cousin to that one Harry Potter movie that was more interested in teen snogging than the actual plot. It’s still plenty of fun, but is also fairly forgettable.

Peter Parker (Tom Holland) is on a European “science” trip with his class and only wants to get with MJ (Zendaya), his charmingly acerbic classmate. But then all that tedious superhero stuff keeps pulling him back in.

This takes place after the events from the last two Avengers movies, which if you haven’t seen, thar be spoilers ahead. As you’ll recall, five years passed after half of all life in the universe was disappeared by Thanos, but then was brought back by the heroes. Which means that everyone who “blipped,” as the Earth people now call it, stayed the same age while those who didn’t kept getting older.

The law of averages would indicate there would be some randomness to how many of the main characters blipped, but for the purposes of screenwriters Chris McKenna and Erik Sommers, who obviously wanted to KISS (Google it), everyone in Peter’s social circle blipped, including MJ and best friend/wingman/keeper of secrets Ned (Jacob Batalon).

Happy Hogan (Jon Favreau), Tony’s right-hander, acts as go-between while canoodling with Aunt May (Marisa Tomei), much to Peter’s dismay. Happy warns him not to ghost on Fury’s phone calls, without much luck.

(Seriously, try calling a Gen Zer. They consider it a personal affront.)

The job has the look and feel of a classic “we just made it up for this movie” scenario. Beings representing the four elements (fire, water, etc.) are popping up, and if left unchecked could destroy the entire planet. That’s what happened to Quentin Beck, a hero from an alternate universe, and he’s come to this version of Earth to stop the disaster from recurring.

Played by Jake Gyllenhall, Beck wears a cool green-and-gold outfit and has an obscuring mist-filled globe for a helmet, getting dubbed Mysterio by the cool kids. He immediately takes Peter under his wing, adopting the role of kindly uncle in stark contrast to Fury’s hardcase stepdad routine.

Holland is I think the best fit of all the Spider-Man actors, and at 23 is still fresh-faced and high-voiced enough to pass agreeably for a teen. His Peter still likes swinging between buildings and pummeling villains, but also wants his slice of normality. As MJ, Zendaya shines playing “the girlfriend” who’s usually a step ahead of everyone else.

Director Jon Watts returns from 2017’s “Spider-Man: Far from Home,” and I’m reminded that despite this only being the second standalone Spidey movie (of this, the third iteration), he’s been in a total of five MCU films, which practically makes the character middle-aged by recent standards.

This is definitely the “fun ‘n’ games” portion of the milieu, so my guess it’s set to get all dark and dreary next time around. Until then, enjoy this powder-puff stretch for what it is.