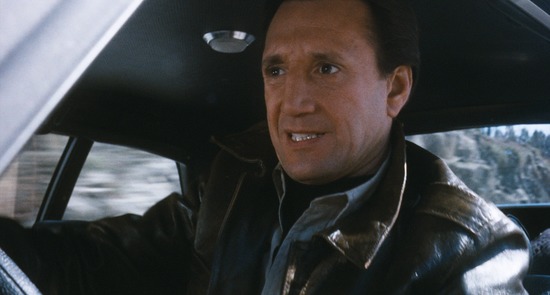 So what do you do after you've produced two iconic cop movies, both featuring roaring car chases, even winning an Oscar for Best Picture to boot?

If you're Philip D'Antoni, the obvious answer is you do a third, and this time you get behind the wheel.

Alas, "The Seven-Ups," D'Antoni's first and only feature as a director, was not nearly as good or successful as "Bullitt" or "The French Connection." It boasts yet another hard-bitten cop fighting against forces greater than himself, and taking matters into his own hands where the limits of the law end.

It did mark star Roy Scheider's leap into leading-man roles, where he would stay for the next 20 years or so, carving out a respectable career as a character actor with his name above the title. Scheider's great blessing as a thespian was that he never looked like he was trying to impress. There was always something of a mystery about him onscreen, a bit of emotional withholding that left you wanting more.

Real-life New York City detective Sonny Grosso, who was the basis of Gene Hackman's character in "The French Connection," provided the story for screenwriters Albert Ruben and Alexander Jacobs to flesh out. This they did not do. Not only is there no fat in the story, it seems deprived of basic muscle and sinew. When you break out the narrative on paper, there's only about one good "Law & Order" episode's worth of story.

The rest is filled in with long, slow burns leading up to the next round of violence. It's the sort of movie where people spend more time talking about what they're going to do, or preparing for it, than actually doing it.

The setup is that Buddy Mannuci (Scheider) leads the titular four-man special undercover unit, so named for their focus on big-ticket crimes that lead to prison sentences of seven years or more. The old-school "lou" above them doesn't care for their unorthodox methods, but his boss, Inspector Gilson (Rex Everheart), likes the results and wants them to keep coming.

They stumble across a scheme to kidnap mob bosses and loan sharks by men who flash badges, and as a result the Seven-Ups find themselves under suspicion. With the IA investigation set to start on Monday, they have one weekend to pull all the pieces together.

One thing the movie doesn't make clear is if these bad guys actually are cops or not. It would certainly make for a more interesting story if they were, as it would seem unlikely that somebody wouldn't know somebody else.

Buddy has a relationship with a low-level mob guy, Tony (Vito Lucia), with whom he grew up on the same hard streets. Tony feeds him info that leads to busts, though not in an entirely un-self-serving way. I think Buddy's smart enough to know that his old friend is using him to take out the competition, but feels like Tony is one of the "good" bad guys.

Of course, it turns out that Tony is actually running the kidnapping operation, which leads to a big final-scene confrontation.

The other Seven-Ups are Ansel (Ken Kercheval), who ends up being the sacrificial lamb; Mingo (Jerry Leon), a big black guy who likes to chomp on cigars; and Barilli (Victor Arnold), a tense, wiry type who always seems to be eating. None of them are given any sort of characterizations other than what's necessary to move the plot forward.

The kidnappers are a pair of real creeps. Bo (Bill Hickman) looks like a corporate desk man and barely speaks. The real villain is Moon, played by cinematic villain par excellence Richard Lynch.

With his heavy brow and stark blue eyes, Lynch has one of those looks that makes people take a step backward. He also suffered terrible burns as the result of an LSD experience, which gave his face and neck a slightly waxy look.

Interestingly, Moon often wears near-hilarious bright color combinations, including an urban/lumberjack combo for chopping up stuff that had me bursting out loud. I was also surprised during the big chase scene, in which he's the passenger, that Moon often seems quite terrified, flashing wide-eyed gapes as they tear around corners or bounce off rises.

Very different from the icy-veined culprits we're used to.

The chase scene was filmed in the upper part of Manhattan, and while it has a few good squeals it's not nearly as thrilling as "Bullitt," which famously featured a Ford Mustang against a Dodge Challenger. Here both cop and criminal are driving brand-new Pontiacs: a massive Grand Ville for the bad guys to Buddy's sleeker Ventura Custom Sprint coupe.

It was coordinated and edited by the same guys D'Antoni used in his other big chase scenes, and ends with an "homage" to the death of Jayne Mansfield. Since it takes place about midway through the movie, Buddy of course keeps his head.

The film has a fairly blasé regard to police brutality, seeing it as a necessary step against a new generation of malevolent criminals, although Buddy and his crew do more threatening than actual pummeling.

Probably the most famous is where they surprise the key mob boss, Max Kalish (Larry Haines), in his bed and threaten him and his wife into giving over information on the kidnappers. Another mobster who has been shot by Moon is interrogated in the hospital by Buddy, who removes his oxygen feed to get him to spill.

Joe Spinell plays Toredano, a garage attendant who works with the kidnappers and is interrogated at the police station by the Seven-Ups. Refusing to help, he shows the cops his battered hands, indicating he's been worked over by their like before. "I didn't talk then, and I'm not talking now."

Immediately recognizing the futility of administering a beating, Buddy lets the guy walk and puts word out through Tony that they'll be visiting Toredano at home to get what they need out of him. Of course, this sets the bait for a final showdown with Moon and Bo.

Like the rest of the movie, it has a lot less flash and energy than you might have hoped. Moon is a classic kiss-up-and-kick-down type, preferring to run and hide as soon as some genuine opposition shows its face. He cowers inside an abandoned van until Buddy comes along. We get the sense he's less lying in wait than simply hiding and hoping his hunter will pass by.

Though it's long on grit and mood, "The Seven-Ups" is but a pale shadow of D'Antoni's earlier efforts. After this he would give up on film and turn to television, where he had some success before leaving showbiz in the late 1970s.

Though he couldn't bring the trifecta, D'Antoni still deserves a place of respect for helping steer two great films.