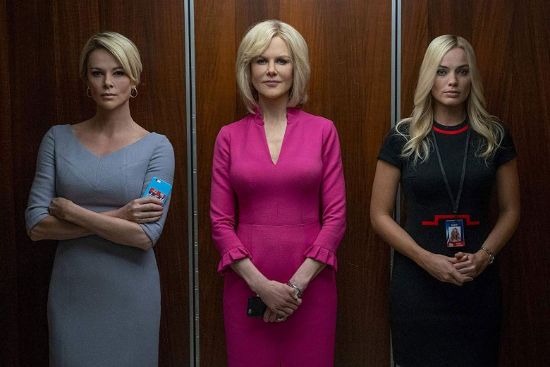 If “Bombshell” looks like a bunch of Hollywood liberals teaming up for a vicious takedown of Fox News, the hated epitome of right-wing media, that’s because it is.

That doesn’t make it any less delicious or entertaining. And it’s as good a cinematic exploration aw I’ve seen of how sexual harassment is tolerated and even condoned.

Director Jay Roach’s last two films were a hagiography of lefty screenwriting icon Dalton Trumbo and a send-up of Republican congressional candidates. Screenwriter Charles Randolph won (deservedly) an Oscar for writing “The Big Short,” an angry and hilarious look at the housing lending crisis that set off the Great Recession.

And yet, “Bombshell” possesses layers and subtleties. It treats its characters as living, flesh-and-blood creatures full of complexities and contradictions. You may even be shocked to hear some of the Fox News women come out looking brave, even a little heroic.

You may have seen that freaky trailer where Margot Robbie, playing an ambitious up-and-comer at the network, is riding in an elevator. Then in walk Megyn Kelly and Gretchen Carlson. They warily study each other through sidelong glances, the tension palpable, and you wonder how the hell the studio convinced Kelly and Carlson to portray themselves.

Except they didn’t. Kelly is played by Charlie Theron, and Carlson by Nicole Kidman. I’m not sure what kind of makeup or even possibly CGI effects were employed, but they look so much like the women they portray you’d swear there was some DNA swapping.

The voices are really good, too. Theron sounds so much like Kelly, with her upstate New York accent and odd word emphasis, it’s downright eerie. Kidman is great, too, though Carlson doesn’t have as distinct a speaking style to emulate.

These are showstopper performances that I’m sure will be remembered during the awards season.

The story follows along in 2016 during the last months of the tenure of Roger Ailes, the notorious political fixer-turned-news-mogul who ran Fox News from its inception. He’s played by John Lithgow in a naturalistic fat suit and facial prosthetics. You’d never call it a sympathetic portrait, but Lithgow manages to find the humanity inside the ogreish exterior.

Ailes believed in giving the audience what it wants, or at least what he’s convinced they wanted, which was right-wing opinion segments, short skirts and lots of yelling. He helped create Donald Trump as a viable candidate and then found himself tied to his yoke, as have so many others.

Robbie’s character, Kayla, is an amalgam of women used and abused by Ailes and a corporate culture that openly treated its on-air talent as sex objects. She begs Ailes for advice to launch her career, and they share a scene of pressure and submission that’s just devastating to watch.

Kate McKinnon plays Jess, a producer who befriends Kayla and has a brief romance with her. Jess is a liberal lesbian who hides her identity because she couldn’t get a job anywhere else but Fox News, and now no other network will hire her.

The best part of the film is the middle section, where the word is out about Ailes’ disgusting behavior and the lawyers are circling. Rather than the walls closing in, the newsroom breaks down into a cheerleading squad led by Jeanine Pirro and a few others, handing out “Team Roger” T-shirts and insisting people wear them.

The #MeToo movement has sparked a lot of good things and also some predictable overreaching and backlash. This is basically the first mainstream movie to deal with the issue head-on, and it’s both chilling and exhilarating.

Many of us who haven’t been affected sit in our privileged perches and wonder how anyone could commit this kind of behavior, or why anyone puts up with it. “Bombshell” is a bravura portrait of how ambition, fear, lust and hypocrisy can combine in the most awful ways imaginable so that people feel trapped.