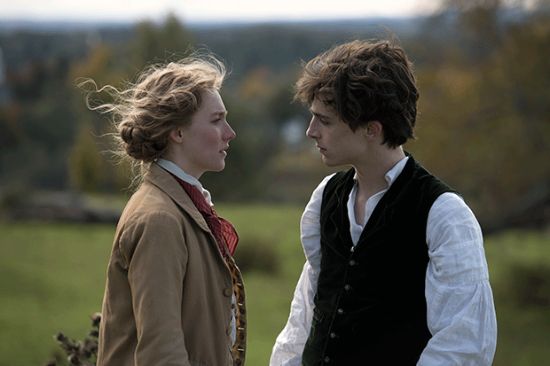 I’ve never read “Little Women” by Louisa May Alcott, and I think that hurts my perception of the latest cinematic adaptation of it by writer/director Greta Gerwig. (The eighth, it is believed.) I was a huge fan of Gerwig’s debut film, “Ladybird,” and although I liked this one, too, I couldn’t escape the feeling I was a tourist wandering through this story.

Alcott’s seminal semi-autobiographical tale follows the four March sisters as they progress from girls to young women, struggle with their places in 19th century society and their various romantic and familial entanglements. Jo March (Saoirse Ronan) is more or less the lead character, a headstrong proto-feminist who wants to be a writer first and a wife maybe never.

I had not realized that the book was published in two volumes, or that Alcott actually produced a pair of sequels. Gerwig’s screenplay juxtaposes the two sections, set seven years apart, using parallel storylines with the March sisters roughly occupying their teen years during the first and 20s during the second.

In addition to Ronan, who also was Gerwig’s star in “Ladybird,” the cast is uniformly superb. Emma Watson plays oldest daughter, Meg, who yearns to be an actress but embraces the push to marry and have children. Florence Pugh is Amy, the youngest and most willful child, who seethes in Jo’s shadow. Beth (Eliza Scanlen) is the wan one who loves music and has the purest heart, so we all know her fate.

Laura Dern plays their mother, aka “Marmee,” who seems impossibly upbeat and saintly but is allowed a few moments of eye-level humanity. Bob Odenkirk turns up late as their father, perennially away serving in the Civil War and not very consequential to the story even when he is around.

The Marches call themselves poor, though they have a nice, large house in Concord and a servant, and give away astonishing piles of food to the truly indigent. Their next-door neighbors are the super-wealthy Laurences, acquaintances who eventually become friends. Chris Cooper plays the patriarch, whose sternness fades after he takes a shine to Beth. Timothée Chalamet plays his layabout grandson Theodore aka “Laurie,” the object of myriad affections.

With his foppy hair, pencil-thin frame and insolent eyes -- if he were a March, he'd unquestionably be the prettiest sister -- Chalamet is the very picture of unearned privilege. He convinces Jo that he loves her, though we sense that emotionally Laurie is a renter, not a buyer. She rejects him, though later comes to regret it.

In the early scenes the March house practically hums with warmth and energy, while in the later sequences it has become drab and colorless. The family suffers setbacks and heartbreak, but carries on.

In the later section, Jo has moved to New York City to work to pursue a career as a writer, with some success. Tracy Letts plays the publisher who mercilessly cuts her pages and encourages her to write short, pulpy stories in which single women are dead or married by the end. “Either one will do.”

Meryl Streep plays their wealthy Aunt March, who could help them a lot more than she does, though she does offer some employment to the daughters and stresses the importance of marrying well. She’s distraught when Meg falls for John Brooke (James Norton), a penniless tutor. Louis Garrel enters the picture late as Friedrich, a romantic alternative for Jo.

I can see why generations of women have grown up loving “Little Women,” because it embraces them as they are and shows how crushing expectations can be, then or now. We instinctively like Jo because she rejects the wife-or-spinster dichotomy and forges her own path. We understand Amy’s impatience and admire Marmee’s innate generosity of the heart.

The movie tells women it’s OK to embrace a family life, or reject it, fall for boys or shove them away, feel strong but sometimes vulnerable, too. “Girls should go out into the world and make up their own minds about things,” Aunt March says.

If I were a woman or an Alcott reader, I’d probably love this film instead of just admiring it.