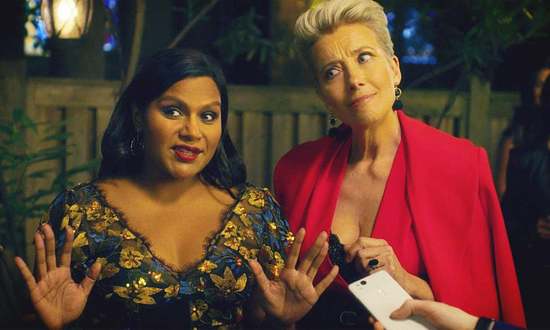 I'd call 2019 a slightly below-average film year. I only gave one film my maximum rating (4 stars, 5 Yaps or an "A," depending on where you were reading it). In retrospect there are two others I would retroactively raise to that level.

What can I say, I'm a stingy critic.

After the top seven or eight movies, though, things drop off pretty sharply. I've been somewhat underwhelmed by many of the concussion picks, including "A Beautiful Day in the Neighborhood," "Parasite" and "Little Women." None of them even made my "also ran" list that comes after the Top 10.

If there's a theme in this year's picks, it's that I went for smaller films over the higher-profile "Oscar bait" or big-budget ones. A lot of films where women or people of color are the center of the story and/or on the key creative team. I'm pleased by that, though I certainly am not one to favor films purely because of identity politics.

So here's my list of the very best, the contenders and a few disappointments.


1. Late Night -- I seem to be virtually alone in loving this film starring and written by Mindy Kaling, with Emma Thompson giving the performance of the year as an acerbic late-night TV host. Vivid female characters and a compelling story about a particular niche industry. It sort of mislays the boyfriend character, but maybe that's not such a bad thing.

2. Harriet -- Another film that received respectful reviews and very good box office for an indie, but somehow got overlooked by nearly every critic. Cynthia Erivo is terrific as Harriet Tubman in a film by Kasi Lemmons that refuses to treat a historical figure as anything less than a complicated, flesh-and-blood person.

3. Ford v Ferrari -- A wonderful movie in the "best sports story you never heard of" mold like "Hoosiers." A charismatic American car builder and a Brit loner racer join forces to vie for the crown at Le Mans. Great action scenes, but the relationships and terrific acting from Christian Bale and Matt Damon put it over the top.

4. The Last Black Man in San Francisco -- I saw this one very late in the awards season, and if I'd been aware of it earlier I would have pushed it harder for awards. A film like no other, as two men contemplate their love/hate relationship with their home city and their families -- whether through bloodlines or the ones they made on the streets. Haunting, poetic, singular.

5. Just Mercy -- This one isn't on anyone's awards radar because of its late release -- it won't hit most theaters until mid-January -- and that's a shame. In many ways it's a conventional courtroom/legal drama about a falsely convicted murderer, but superb performances make the day. Michael B. Jordan, Jamie Foxx, Rob Morgan and Tim Blake Nelson all should get Oscar noms.

6.  Portrait of a Lady on Fire -- I can't pronounce any of their names, but actresses Noémie Merlant and Adèle Haenel are amazing as a painter and her muse in this riveting love tale set in the 1800s. Nobody directed a film better this year than Céline Sciamma. This one stays with you.

7. Marriage Story -- It may sound like a "Kraver v. Kramer" reboot, but this layered look at divorce from Noah Baumbach features a pair of great acting turns by Scarlett Johansson and Adam Driver, as well as very good supporting turns from Laura Dern, Alan Alda and Ray Liotta. There's a lot of lawyering but the film is less concerned with the legal stuff than the effect it has on the heart.

8. 1917 -- Yes, Sam Mendes directing this World War I drama in one long take is a gimmick, but it's a good gimmick. It serves to heighten the intensity rather than just existing for its own sake. Two no-name actors traverse a hellscape of trenches and strewn bodies to try to commit one good deed.

9. Bombshell -- Really, the first #MeToo movie. Charlize Theron should get an Oscar nomination playing Fox News star Megyn Kelly as she carefully negotiates an atmosphere of sexual harassment and depravity. Margot Robbie, Nicole Kidman and John Lithgow are top-notch, too.

10. Richard Jewell -- Despite its glaring (and easily avoidable) flaw, Clint Eastwood's latest is still a compelling look at how the media scrum of the early 24/7 new cycle age nearly destroyed an innocent man who was actually a hero. DOA at the box office, alas.

I always include a tally of the films that contended for my Top 10 list. Listed alphabetically.

Abominable -- One of the best animated film of the year, doomed by being the third yeti movie of 2019.
The Aftermath -- Completely overlooked post-WWII love triangle with Keira Knightley, Jason Clarke and Alexander Skarsgård.
Avengers: Endgame -- A fitting wrap-up to the first generation of Marvel movies.
Captain Marvel -- My pick for the best superhero flick this year.
Jojo Rabbit -- Brash, original, funny, occasionally quirky for quirky's sake.
Joker -- Another off-kilter powerhouse turn from Joaquin Phoenix.
Honey Boy -- Made me respect Shia LaBeouf again.
How to Train Your Dragon: The Hidden World -- I say the Dragon series is the GOAT animation franchise, especially after the lackluster and totally unnecessary "Toy Story 4."
Knives Out -- A fun twist on the whodunit genre with a wonderful ensemble cast.
One Child Nation -- The best documentary I saw this year; you think you know the issue and then find out you don't.
Pain and Glory -- Not enough love for Pedro Almodovar's latest.
Star Wars: The Rise of Skywalker -- Many quibbles, but I have never not loved a Star Wars movie.
Sword of Trust -- Beautiful little indie comedy that should lay to rest any question about Marc Maron's acting ability.
The Two Popes -- The rarest of animals: a deep cinematic exploration of religious faith.
Us -- I thought Jordan Peele's "Get Out" tremendously overrated, but "Us" is the rare horror film that actually unnerved me.

Some of these I actually liked, but just found they punched way below their touted weight. Others I actively loathe.

Apollo 11 -- I didn't learn one new thing I didn't already know, other than spacemen are boring on the radio.

A Beautiful Day in the Neighborhood -- Classic good-not-great drama. *Interesting* choice to make Fred Rogers a supporting character in his own movie.
Booksmart -- All the right people love this flick, which just isn't as funny or original as it seems to think it is.
Dumbo -- Occasionally I still hear Colin Farrell's awful cowboy accent in my nightmares.
Godzilla: King of the Monsters -- All these modern makeovers seem to forget these are supposed to be cheesy movies.
It: Chapter Two -- What an epic faceplant. How Not to Sequel.
The Lion King -- Why? ... Why?
Little -- Congrats to Hollywood's youngest executive producer, which will be a good epitaph after her and this aggressively awful comedy are forgotten.
Once Upon a Time... in Hollywood -- Quentin Tarantino shoots great scenes, but three decades in still doesn't know how to string stories together.
Rocketman -- Wants so desperately to be as good as "Bohemian Rhapsody." P.S. Freddie Mercury had a better voice and story.
Uncut Gems -- An exercise in annoyance. I don't see Adam Sandler's performance as breaking any new ground. The talents of the Safdie brothers continue to elude me.
Posted by Christopher Lloyd at 12:30 AM