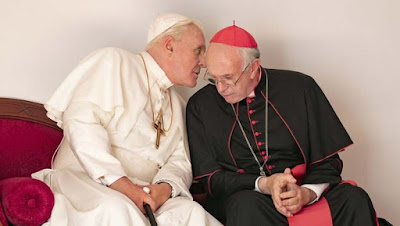 Before Joseph Ratzinger, aka Pope Benedict XVI, resigned his position in 2013 no Catholic pontiff had voluntarily stepped down prior to death going back to the 1200s. The fact that his successor, Pope Francis, represented a sharp turn from Benedict’s adherence to strict, conservative interpretation of scripture underscores what a watershed moment their passing of the baton was.

“The Two Popes” is an often-mesmerizing, splendidly acted look at the relationship between the two men. It is a semi-fictitious account of their secret meeting over the course of a few days as two adversaries come to be allies, and perhaps friends.

Anthony Hopkins plays Benedict and Jonathan Pryce is Francis, aka Jorge Mario Bergoglio, in what is essentially a two-man, two-hour dialogue about religious faith and earthly tribulations.

Think “My Dinner with Andre,” with cassocks.

It’s more Bergoglio’s story than Benedict’s, as the story follows him and Benedict is only glimpsed through his eyes. Still, both men are revealed as three-dimensional, flesh-and-blood creatures riven with a combination of gloomy doubts and fiery certitude.

The story begins in 2005, when Benedict is chosen over Bergoglio to be the next pope. The first is German, a scholar, and openly campaigns for the position. The latter is Argentinian, a conflicted man of the people, and quietly urges behind the scenes for the church to reform.

Flash to 2011, and the pope summons Cardinal Bergoglio to Rome for mysterious purposes. It turns out the subordinate had already bought a plane ticket to see his superior in order to ask for permission to retire. But it’s clear the pope is intent on taking measure of the cardinal’s mind and soul.

In turn, the younger man insists that the masses are turning away from Catholicism because of the church’s failure to live up to its own teachings, such as turning a blind eye to predatory priests who had sexually abused young members of the flock.

We also flash back to earlier periods in Bergoglio’s life, such as when he broke off his marital engagement in order to return to the seminary. (Juan Minujín plays the younger version.)

Later, there is a look at his actions as the head of the Franciscans during the Argentinian military coup of 1976. It was a dark time when citizens and even priests often disappeared into prisons, sometimes never to return. Bergoglio is challenged by his own priests, and has to make some harsh choices.

Back in the present of 2011, Bergoglio is still tortured over whether his actions were the right thing to do. Benedict, finally seeing the veil of certainty drop from the ardent reformer, sees not weakness but the humility needed to be a great leader.

Both men confess to each other, as men and as priests. Despite their lofty places in a religious order they experience crises of their faith. Bergoglio says he feels like “a salesman for a product I don’t endorse.” Benedict is haunted by the silence of God’s voice in his mind since he became pope.

Bergoglio flashes anger at the pope for letting predatory priests move from parish to parish while the victims were abandoned. Benedict both admires and resents the cardinal for the unassuming charisma he has with the people.

“Whenever I try to be myself, people don’t seem to like me very much,” he says with a painful grin.

Director Fernando Meirelles (“City of God”) and screenwriter Anthony McCarten (“The Darkest Hour”) have given us a film that is both intimate and grandiose. We don’t see a lot of serious explorations of faith in popular movies, religious characters tending to be portrayed as doctrineless saints or dastardly zealots using their deity’s teachings for their own purposes.

But “The Two Popes” is just such a film. Though it tends to paint Francis as the good-hearted reformer and Benedict as an old-world pedant, the movie refuses to worship or condemn either man. Both are given their due measure of grace.