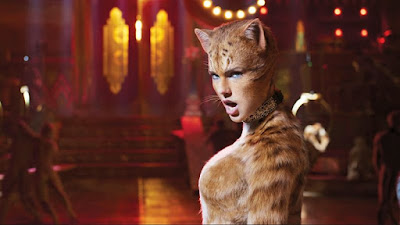 Welcome to the 15-minute review exercise! That's how much time I have to write this on my lunch break, so you can feel free to compare it to my more studied musings.

First of all, I am a "Cats" virgin. Which is to say I had no experience or knowledge of the stage musical going in. I knew it had people dressed as cats, there was that one ubiquitous "Memory" song, and... that was it.

My understanding is the film version diverges in ways large and small from the Andrew Lloyd Webber stage version. Victoria, who is more or less a sideshow dancer live, is the main or at least the central character here, playing a castaway kitten who is our eyes and ears into the story.

Played by ballet star Francesca Hayward, a film newcomer, Victoria doesn't have a strong character of her own but spends most of the time mouth agape with awestruck eyes reacting to the stuff around her. Her dancing is unsurprisingly magnificent, as if she is not bound to the earth like the rest of us. She also has a great singing voice, like the peal of a clear, pure bell.

Frankly, I much preferred hearing her than Taylor Swift, who is being played up as the star of the movie. She actually has only one scene, a musical number that's one of the weaker in the movie. She isn't even talking about her own character, but acting as an emcee introducing Macavity, the villain of the piece played by Idris Elba.

Indeed, most of the musical numbers are a showcase for one particular cat to talk about their life and experiences. For example, Ian McKellen plays Gus (short for Asparagus), a decrepit old "theater cat" whose soliloquy is basically him relating past greatness. Like a few other non-singers who were cast, McKellen does the "talk-singing" thing that Jimmy Cagney first made famous.

I suppose I need to talk about the cat outfits. They're good... and weird. The film uses a combination of costumes and makeup with CGI for the ears and tails. They don't look anything like cats, just humans playing as cats. Some are better than others. Elba looks way too big and muscle-y for the get-up.

Weirdly, some of the cats wear shoes while others are barefoot, and they look like human feet rather than cat's paws. Some wear people clothing, hats and jewelry, while some like Victoria are essentially nude, which makes the PG rating from the MPAA seem a little incongruous.

Some actors you will recognize, like Rebel Wilson and James Corden, McKellen and Judi Dench. Others are dancers or musicians you may or may not have heard of, like Jason Derulo as Rum Tum Tugger, a capricious show-off.

The story is... straight bonkers. I couldn't make sense of it while the movie was going, and then when I read a summary of it for research afterwards I thought I had stumbled onto the secret Scientology texts or something.

Set in London we follow the tribe of "Jellicle" street cats who are in the annual process of deciding which of them will be picked to make the journey to the Heaviside Layer and be reborn into a new life. It's unclear if this marks their progression between the nine proverbial cat lives, or the end of them.

Each candidate cat performs their story and the Jellicle leader, Old Deuteronomy (a male on stage but played here by Dench), picks the "winner."

Some cats are in the front of the story, while others come and go. There's a tap-dancing "railway cat" who shows up and then leaves. Some cats get zapped by Macavity and imprisoned on a barge on the Thames, and no one notices them missing. There's twin troublemaker cats and a snobbish besuited cat and... well, you get the idea.

The last big part is Jennifer Hudson as Grizabella, a former "glamor cat" who is shunned by the others for reasons that are never hinted it. She gets to sing the iconic "Memory" song in several reprises, which is a lovely tune but when you listen to the lyrics in the context of the story are totally baffling.

Apparently Grizabella was once beloved and now is lonely and she yearns to be touched. (Sounds like my teen years.) Otherwise she'll have to wander among the lamplights and wait for a new day to begin with more ostracism, and singing.

I'm also just going to throw this out there: Am I the only one who was bothered by the copious snot trails coming out of Hudson's nostrils and streaming into her mouth while she sang? I'm sort of gobsmacked that no makeup person or PA on the set handed her a tissue between takes. Or while they were CGIing in the tails they don't wipe that out.

I like emotion in movies but draw the line at people consuming their own bodily secretions on camera.

The parts of "Cats" that work well work really well. I quite liked Laurie Davidson as Mr. Mistoffelees, a magician cat whose tricks usually don't come off very well and thus he has some pretty crushing self-esteem issues. He gets his own big musical number that, other than "Memory," is probably the best in the flick.

The parts that don't work are embarrassing or just boring. Several of the comedic numbers just aren't very funny; Wilson's is a case in point. A lot of the time I struggled to make out the words the cats were singing, other than they all seem to come down to "Hey I'm a cat so I'm doing cat stuff."

The film ends with a musical number that is so incredibly flat and purposeless that I can't believe in nearly 40 years of "Cats" no one has ever shouted at the curtain call, "Cut that last song, it's terrible."

But again, this is all new territory for me. "Cats" is still kinda magical in a goofy sort of way. No disbelief is suspended but it at least gets set aside for awhile.

Posted by Christopher Lloyd at 2:46 PM