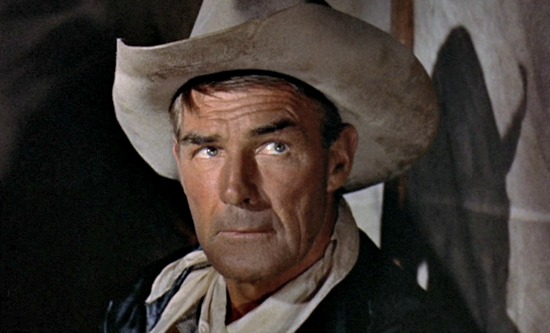 John Wayne wanted to star in "7 Men from Now," purchasing the script from rookie screenwriter Burt Kennedy, but was already committed to another role -- "The Searchers." He suggested his friend Randolph Scott for the part, staying on himself as producer. Bud Boetticher was brought in, a director known for his bleak, spare style that seemed to fit the tale of revenge and redemption.

Thus began a collaboration of seven Westerns over four years for Boetticher and Scott, with Kennedy joining them for four of them as script man. Scott, who was already in his late 50s at the time, found a whole new stretch of leading roles in what has come to be known as the Ranown Cycle.

After making one more Western, "Ride the High Country," in 1962 with fellow cowboy actor Joel McCrea for an upstart young director named Sam Peckinpah, Scott promptly retired from acting, having said all he felt he needed to on the big screen. (McCrea followed suit).

It's a lonesome, whistling ode to the Western genre without a single extraneous note.

Scott is the apotheosis of the Western star: tall, rangy, weathered face with sharp eyes, slow to anger and reluctant to speak one more syllable than absolutely necessary. When he does talk, he's invariably ordering other people around.

He plays Ben Stride, former sheriff of Silver Springs, now an outlaw himself chasing the seven men who held up the Wells Fargo bank, inadvertently killing his wife in the process. Stride wasn't actually involved in the shootout; he'd lost the vote for reelection six months earlier and declined an offer to stay on as deputy. His wife took the job to support them, and his pride cost her life.

Of course, all this isn't revealed until very late in the game. And Stride doesn't say most of it: He's a man who is talked about, not one who talks about himself.

The opening sequence is typical of the entire film: during a terrible rainstorm, Stride saunters into a cave where two men are taking shelter. He was jumped by Indians 10 miles back and his horse killed, he grunts in between sips of coffee. After establishing the pair were involved in the robbery, two shots ring out in the night, startling the men's horses.

Now riding with the other horse in tow, Stride encounters John Greer (Walter Reed) and his wife, Annie (Gail Russell), a couple of pioneers striking out for Californee. After helping them get their wagon unstuck, Stride accompanies them as unofficial protector. He's clearly attracted to Annie, who reminds him of his wife.

John is depicted as "short on spine," to use another character's words, a salesman by trade ill-suited to life on the open range. Annie adores him nonetheless, but also is drawn toward the masculine magnetism of Stride. The screenplay provides just enough to make us understand they care for each other, without getting into any kind of overt betrayal of marital vows.

Russell had a bad problem with alcohol after an early rush of stardom in the 1940s, including "Angel and the Badman" with Wayne. "7 Men from Now" was her first film in five years, and the crew reportedly took pains to keep her away from drink during production. The following year she'd plow her car into an iconic L.A. coffee shop, and only had a handful of other roles before drinking herself to death at 36.

Her character is described as "25 or 26," and Russell herself was only 31 when the film was shot. Between her baggy eyes and heavily lined brow, which Boetticher 's camera labors to conceal, you'd think she was Scott's contemporary.

The other notable character is Bill Masters, an outlaw who has a past with Stride. Wearing a bright green scarf around his neck and another red one twisted upon his sleeve, he's played by Lee Marvin in one of his more memorable supporting roles as he established himself as an actor.

Masters wasn't involved in the robbery but knows who was, and tags along with Stride and the Greers in hopes of securing the $20,000 in gold for himself. He and Stride enter a sort of undeclared detente, setting aside their past roles as the criminal and the sheriff who closed a jail door on him. Also coming along is Masters' henchman, Clete (Don "Red" Berry).

Much of the middle section of the movie plays out as a tense love quadrangle, with Masters openly desiring Annie for himself, while also being the only one to acknowledge the attraction between her and Stride. He attempts to undermine John, describing him to Clete as "half a man." Though Greer's got a secret of his own, and eventually displays his mettle (if not the greatest of brainpower).

There's one terrific scene, which takes place in another downpour, as the three men and Annie take shelter inside the wagon. Masters taunts Greer right up to the point of insulting him outright, as well as showcasing his lascivious feelings for Annie. Finally having enough, Stride runs him and Clete off, then makes his bunk in the dry spot underneath the wagon while Greer stands watch.

Separated by just the floor of the wagon, Stride and Annie share a tender exchange of aching yearning neither one of them is able to fully articulate.

Of course, this being a Western it has to end with a shootout. Finally arriving in Flora Vista, we meet Payte Bodeen (John Larch), the leader of the seven robbers. He's an oddly contemplative villain for a Western, always scratching his chin and glancing sideways. Bodeen is the sort who's so busy trying to think three chess moves ahead, he winds up wasting all his pawns.

Suffice it to say that Stride, the remaining five outlaws and Masters' twosome are destined to collide in the deep mountain valley outside of town. Hobbled early on by a bullet in the leg, Stride uses his long rifle as a crutch, employing his wiles to get the drop on his enemies.

"7 Men from Now" isn't a particularly well-remembered film, and I can understand why. It's so distilled down to its purest essence that it doesn't feel like a complete cinematic meal. It's like a dinner consisting entirely of charbroiled steak without any seasoning or fixin's. You have to really enjoy that kind of meat to appreciate the meal.