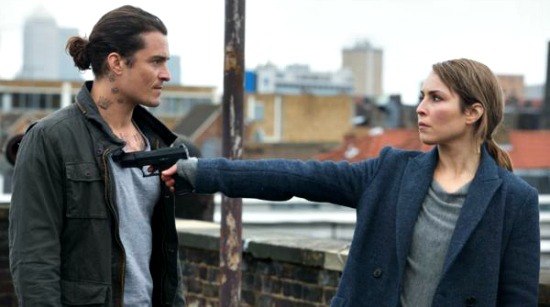 “Unlocked” wears the clothes of a B-movie spy flick but has A-list talent both in front of and behind the camera. The result is a taut, well-paced thriller high in both entertainment value and uncomfortable musings about how international intelligence agencies have reacted to radical Islamic terrorism.

Noomi Rapace stars as CIA agent Alice Racine -- foreign-born, to explain the accent -- who’s taken a low-level assignment in London. Her cover is an advocate for immigrants, passing along any suspicious cases to her British MI6 counterpart, Emily Knowles (Toni Collette). It’s tedious, unrewarding work, but Alice failed to stop a terrorist attack in Paris two years earlier, and her confidence has eroded.

Her specialty is “unlocking” hostile witnesses, aka getting them to spill the beans on imminent activity. Alice is not an “enhanced interrogation” sort, tending to use her wiles and relationship-building with suspects who are usually not the bombers and shooters, but (relatively) docile bagmen and such who make the connections between terrorist cells.

She’s brought in by the European CIA chief, Bob Hunter, played by expert-in-squirrelly John Malkovich. It seems their current “unlocker” has died of a heart attack, and there’s word of a mass chemical attack being financed by a “trust fund jihadist” of English birth (Raffaello Degruttola).

They’ve caught a young courier carrying a message from an imam (Makram Khoury) suspected of radical affiliations, so it’s up to Alice to save the day. Michael Douglas pops up as Eric Lasch, a retired spook and mentor to Alice who’s ready to lend a hand.

The screenplay is by Peter O’Brien, a promising rookie who blends high-octane action scenes with plenty of plot twists and paranoia in between. Without giving away too much, Alice finds herself caught in a no man’s land between the American and British spy services, whose integrity has been compromised, and the jihadis.

Popping up to help, sort of, is Orlando Bloom as Jack, a scruffy thief who’s unlucky enough to pick Alice’s safe house to rob. They throw in together out of grudging happenstance. Tosin Cole impresses as a (legit) client of Alice’s day job who also gets recruited out of pressing needs, and is appropriately awed by all the spycraft and gadgets.

The film is directed by British filmmaking legend Michael Apted, who has to go down as one of the most important director never to receive an Academy Award nomination. (Though he has plenty of recognition from the U.K. equivalent BAFTAs, not to mention the Director’s Guild of America.) He’s perhaps best known for his “Up” documentary series documenting the lives of ordinary Brits from childhood to middle age.

But Apted also directed a Bond movie back in the day, and clearly hasn’t lost his touch for action sequences. Despite her small frame, Rapace is entirely convincing as a hand-to-hand badass. There aren’t any big-money antics, highway crashes and boat chases and such. But these constraints actually make the film feel lower to the ground and ruggedly authentic.