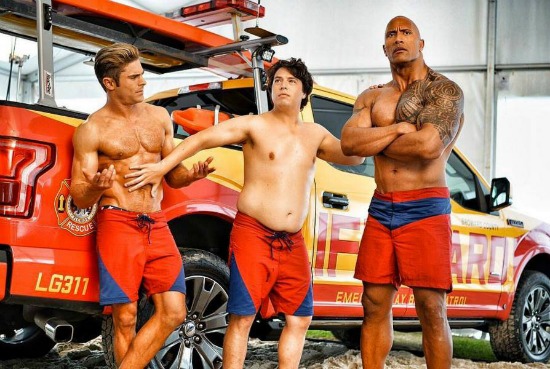 Stretching is good if you’re exercising but not if you’re making movies. “Baywatch” is a sorta-spoof of the television show that has about 30 minutes’ worth of decent material, but then tries to string that out to a two-hour movie. The end result is a flick with a few good laughs and a whole bunch of filler in between.

Dwayne Johnson plays Lieutenant Mitch Buchannon, the veteran leader of the local lifeguard crew. (Motto: “Risking Our Lives and Flexing for $9/hour.”) The running joke is that he takes his job way too seriously, behaving more like a special ops operative than a dude in jams and flipflops.

As the story opens Mitch is recruiting two new spots on the team. Matt Brody (Zac Efron) would seem to be the top candidate, an Olympic swimming star who can cut through the water like nobody else. But he’s also an arrogant ass who disgraced himself and is looking to take the next steps.

Summer (Alexandra Daddario) is the competition he takes a shine too, who’s too smart to fall for his bro-dude antics. Rounding out the cast of contenders is Ronnie (Jon Bass), a schlubby but good-hearted guy who would seem to be a long shot to make the team.

It’s a pretty raunchy affair, with the boys showing off a lot more skin than the girls. The plot is a forgettable lark, something about an evil businesswoman buying up the beach. Mitch and his fellow lifeguards take on the extra duty of solving some murder and fraud in between elliptical workouts.

There’s been a whole slew of old TV shows turned into movie spoofs in recent years. I’m not opposed to the idea, but I can’t think of a one of them that’s been better than mediocre. “Baywatch” doesn’t sink, but it doesn’t exactly swim, either.

Bonus features include an extended version of the film with new and longer scenes, plus four-making of featurettes. They’re only available on the Blu-ray, though, as the DVD edition has none.