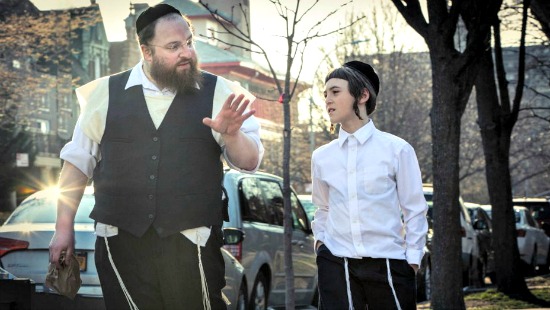 Menashe, a widower in Brooklyn’s tightly cloistered Hasidic Jewish community, is known to be a world-class schlimazel -- Yiddish for “unlucky person.” Though in this engrossing drama from director/co-writer Joshua Z. Weinstein, I’d say Menashe is more of a schlemiel than a schlimazel. That’s a bumbler who screws up all the time.

"The schlemiel spills his soup on the schlimazel," goes an old saying that helps distinguish the two.

Played by Menashe Lustig, upon whose real-life experiences this fictional film was based, Menashe is the loser in his extended family, who regard him with a mix of pity and contempt. He’s the guy who never made good, working in a kosher grocery while other men his age are running businesses of his own.

Husky and sweaty, he ambles about the neighborhood in his shirtsleeves and tzitzit frock, eschewing the proper coat and hat of other good Jews. His son, Rieven (Ruben Nidorski), loves his daddy but is keenly conscious of how he is looked down upon by most everyone, especially his uncle, Eizik (Yoel Weisshaus), a successful real estate dealer.

Menashe lost his wife, Leah, almost a year ago and has been separated from his child ever since. According to The Ruv, the powerful local rabbi played by Meyer Schwartz, a boy must be raised in a proper two-parent household. The Ruv quotes the Torah, saying a mensch must have a nice home, a nice wife and nice dishes.

Menashe has been resisting matchmaking efforts, including one scene where he tells a woman widowed just four months ago that she’s “not my type,” which leave her more bewildered than insulted. In their community, marriage is about bonding families and raising children, not romance.

“And you’re everything I’d pray for in a husband?” she retorts contemptuously.

Shot over the course of two years within the Hasidic neighborhoods and told almost entirely in Yiddish, “Menashe” is the story of a man who lives both within and outside the traditions of his people. He is industrious in his job, but often shows up late or drops the fish. He dearly loves Rieven but rebukes the boy for poor impulse control that he himself mirrors.

Mostly, he craves the respect that eludes him. Menashe has complicated feelings about his wife, the result of an arranged marriage that was not a happy one. He argues with Eizik about custody of his son, requiring the intervention of The Ruv. This results in them being temporarily reunited, a few days during which they can bond while exploring the boundaries of their fractured relationship.

Adorned with a simple sort of beauty, “Menashe” takes us deep into a people of traditions that may seem strange to most eyes, where we recognize problems and conflicts that occur everywhere humans make their home. It’s a reminder that all of us play the schlimazel at some point in our lives, as well as the schlemiel.