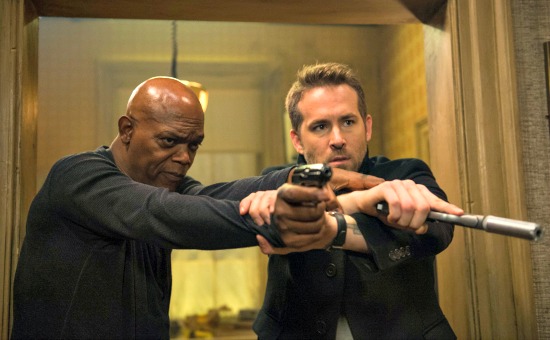 I kinda liked “The Hitman’s Bodyguard,” even though it’s a pretty rote, predictable march through all the buddy cop tropes.

Though I guess we should call it a buddy spy flick, since Samuel L. Jackson and Ryan Reynolds don’t play law enforcement types but superspies, the kind who can chop-socky their way through a crowd of bad guys while the camera spins around them, or take out three dudes with three bullets from 100 feet away, while hundreds of the foes’ bullets never seem to find their mark, or if they do it’s a cute little nick that doesn’t slow them down.

It’s frenetic, fast-paced, filled with lots of quips intercut with some rather bloody carnage, Reynolds doing his charming/nervous thing and Jackson dropping a torrent of mother-effers like only he can.

It’s a fun movie. It’s not particularly smart or original; every character fits snugly into their square or round peg. We know the pair are going to hate each other, then grudgingly work together, and wind up as eternal besties.

Gary Oldman turns up as the villain, a Belarussian dictator named Dukhovich who’s on trial in the Hague for war crimes. All the witnesses against him repeatedly turn up dead, so it looks like he’s going to get sprung. Oldman alternates between chilly threats and monomaniacal raving, his cheeks even touched with a spot of pox so the bad guy can be easily picked out. It’s the sort of role Oldman has played a thousand times and could do in his sleep.

Jackson is Darius Kincaid, a legendary assassin who seems to be the last witness left against Dukhovich. Things go badly with the Interpol protection squad, led by tough lieutenant Amelia Roussel (Élodie Yung), making it obvious there’s a rat in their midst.

(Hint: always look for the swarthiest fellow amongst the Caucasians.)

Roussel is forced to call in Michael Bryce, formerly king of the protection agency game and also her ex-boyfriend. His last big gig protecting a Japanese arms dealer ended poorly, so now he’s the bottom of the barrel instead of triple-A rated -- a standard that may or may not actually exist, but one he’s obsessed with reclaiming nonetheless.

It seems Michael and Darius have often been on opposite sides of a sniper rifle from each other, so there’s bad blood. The story (screenplay by Tom O’Connor) turns into a road picture as they are chased over land, air and sea on their way to the Hague, which is going to close the proceedings against Dukhovich unless Darius shows up by 5 o'clock the next day.

(I guess the Hague judges never heard of stays? Or testimony via live video feed?)

According to what I’ve read the budget on this picture was only $30 million, and director Patrick Hughes milks a ton of high-adrenaline action scenes out of that tidy sum. A combination road/boat chase through the canals of Amsterdam was my favorite, a sequence worthy of a Bond flick.

Along the way they fight, give each other the slip, bicker over M.O.’s and lady loves -- Salma Hayek plays Darius’ imprisoned squeeze -- and even sing a couple of songs. Jackson does an off-tune rendition of “Nobody Gets Out Alive,” which I assumed was a classic blues standard, but is actually a new song the actor wrote and performed himself, delivering a much better version for the closing credits that’s worth hanging around for.

It’s the only part of the movie I would deem triple-A rated. The rest is one-and-a-half As, at best. (Aa?)