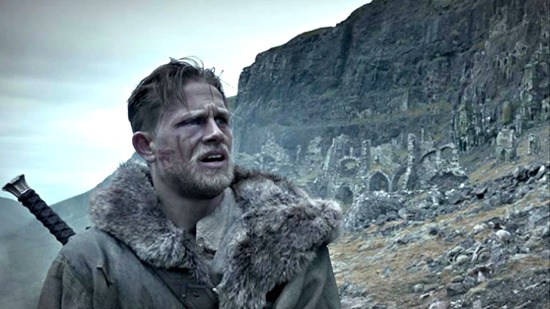 I grew up reading and loving the Arthurian Legends, and have mostly groaned at the cinematic adaptations of them. The sub-genre reached its zenith with 1981’s “Excalibur,” and hasn’t come anywhere close since. If John Boorman’s version was the pinnacle, then surely Guy Ritchie’s “King Arthur: Legend of the Sword” represents rock bottom.

Some movies are confusing; others are simply confused. I doubt this seemingly random mash-up of King Arthur lore, martial arts chop-socky, steampunk criminal intrigue and New Age-y mysticism made much sense even to the people making the film.

Charlie Hunnan plays Arthur, reimagined here as a street urchin who grew up among thieves and has risen to be their lord. Just a little light extortion and prostitution, if you please. He watched his father, King Uther Pendragon, die at the hands of his evil uncle, Vortigern (Jude Law), and has evolved into a standard-issue Avoiding My Destiny protagonist, a la Simba from “The Lion King.”

Soon enough he pulls Excalibur from the stone, and assumes the leadership of the rebellion consisting of some Uther loyalists, the thieves’ guild, a wayward mage who can control animals and not much else, and the rest of the ragtag.

Meanwhile, Vortigern is building a magical tower that augments his own sorcery, which never really gets all that impressive. Behead that architect!

Ritchie’s whirling dervish directing style, which is the cinematic equivalent of attention deficit disorder, is known for jumping around in time and space with head-snapping velocity. It works in small doses with the right material -- see his 2015 “The Man from U.N.C.L.E.” for a prime example.

But “Arthur” often seems like a random assembly of shots without any kind of cohesive aesthetic connecting them. We’ll see Arthur swinging his sword in battle, for instance, and then cut to a shot of the mage standing enchanted on a hill far away, a murder of CGI crows swirling about her in slo-mo.

It’s a great-looking movie, but the story, characters and tone are disconnected from each other, or anything that could be reasonably termed entertaining.

Video extras are decent. The DVD comes only with a single featurette, “Arthur with Swagger,” a profile of Hunnan’s take on the character.

Upgrade to the Blu-ray edition and you add seven more featurettes, focusing on Ritchie’s vision, sword training for the cast, creating a grimier Camelot, stunt choreography, behind-the-scenes relationships and the mythology behind Excalibur.