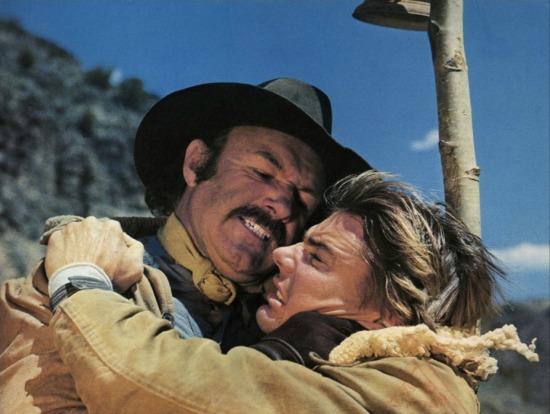 I retain many disconnected images of cinema I saw in my youth, like jigsaw puzzle pieces scattered far afield of the set. Usually, they don't ever get fitted back together again with their movie.

One of the most vivid is of an exhausted cowboy climbing off his lathered horse right before the finish line of a grueling race, pausing to give the poor animal a drink of water from his canteen before taking one himself. I had no idea of its provenance, until I recognized it from "Bite the Bullet," a largely unremembered 1975 Western written and directed by Richard Brooks.

Letting the horse drink before he does is simply the way of Sam Clayton, a former Roughrider and ranch hand who joins the 700-mile race at the last minute, seemingly on a whim. He takes his time dawdling through most of the contest, usually near the back of the pack. After awhile we get the sense he's only there to watch over the horses, and to a far lesser extent the people riding them.

Sam is introduced by another pivotal character as a "defender of dumb animals, damsels in distress, champion of lost causes." He expresses his true feelings about the race just before the jump-off:

"Mister, did you ever see a horse run himself to death just to please the man on his back? What's the horse get out of it? Cracked bones? Colic? See his picture in the paper? Horse doesn't give a damn who wins a race. Me neither," Sam snorts.


Played inimitably by Gene Hackman, Sam reminded me in a lot of ways of Tom Smith, the horse trainer so memorably portrayed by Chris Cooper in "Seabiscuit." Both are very much disciples of the range, at home among hard men and hard living, yet standing apart from them in many ways -- not the least of which being their genuine compassion for the animals who serve them.

(Though Smith does obviously care about winning races.)

Sam is entirely capable of cruelty, returning abuse when he sees it visited upon horses by humans. In the opening scene he is appalled to find an abandoned glue wagon with several horses left for dead, including a pair that have been trussed up as bait for vultures. After setting free a still-living horse and rescuing a new foal, he is choked up by a mare that has essentially been crucified, its body held down and pierced by thick wire.

The look in Sam's eye leaves us certain that if the men who committed this atrocity were at hand, murders would be in the making.

Later, Sam encounters a stupid young cowpuncher, Carbo (Jan-Michael Vincent), attempting to knock out a jackass with one blow. Sam gives the boy the exact same treatment with his own fist, leading to a running feud that culminates with Sam whipping Carbo as punishment for riding his horse to death.

He makes the kid bury the beast, using his bare hands to sift the desert sand over the carcass -- an almost religious ritual in which the boy must tend to the flesh he has abused.

In a typical movie narrative, the punk cowboy would become the villain of the piece. Instead, the stern hand of Sam actually leads to Carbo's rehabilitation. His bravado finally falling, he admits to Miss Jones, the sole female contestant played by Candice Bergen, that despite the fancy pistol rig he wears he's never been in a gunfight, or even worked as a cowboy.

When Sam experiences that glorious moment at the end, the shared slaking of thirst by man and horse, it's Carbo's face the camera cuts to, teary-eyed. He witnesses this tender example of a symbiotic relationship between partners, not servant and served, and is overcome.

We sense the youngster will go on in life, a fake cowboy who turns into a real one, and take up Sam's mantle as a true defender of the West.

The race may sound like Hollywood hooey, but it's based on an actual events. In this telling set in 1908, the contest is sponsored and promoted by the "Western Press," mostly as a vanity project for magnate J.B. Parker (Paul Stewart) on behalf of his champion horse. He and his pompous son, Jack Parker (Dabney Coleman), ride around in a luxury train along the race route, applying cajoling and pressure as needed.

Sam worked for the Parkers, and his job was to bring their horse to meet the train gathering the contestants for the race. But he screwed up by stopping to help the glue horses and missed the train, and finds himself fired.

It's a little unclear if Sam was intended to ride the Parkers' horse in the race or merely fetch him, but either way he's out of a job. We would expect the fellow who does ride the rich man's horse to be a boastful fool, but he actually describes his opponents with great respect and delivers a cagey analysis of their abilities. They include:
"Bite the Bullet" is a character piece that's not really driven by story. Indeed, beyond the framework of the race, there really isn't much of a narrative at all. The riders start out as individual competitors and gradually find out more about each other, eventually coming together in a bond of their own small, shared little community.

Sam sets the tone by repeatedly stopping to assist other racers, and soon it becomes infectious. Luke helps Norfolk when he tumbles down a ravine, and Miss Jones attends to Mexican with almost maternal sympathy. As mentioned, even the mercenary Carbo softens in the end.

Richard Brooks is a giant of midcentury cinema who doesn't have nearly the reputation he deserves. Often writing his own screenplays as well, his credits include "Cat on a Hot Tin Roof," "In Cold Blood," "The Professionals," "The Last Time I Saw Paris," "Blackboard Jungle," "Lord Jim" and "Sweet Bird of Youth." He was nominated for the Academy Award six times, and won once for "Elmer Gantry."

I think what I most appreciated about "Bite the Bullet" was the sheer atypicalness of it. The movie never moves in a conventional direction. I would call it a neo-Western or revisionist one, which harkens back to the pillars of the genre while also questioning and undermining them.

Sam Clayton is tough, ornery loner, but his value system is decidedly askew from that of the Saint Johns of the Western, Wayne and Ford. At one point Sam actually declares himself un-American, casting competition and the desire to be the first or the best or the richest as unworthy endeavors.

The dialogue is whip-smart and memorable, with so many great throwaway jokes and asides. Other notable characters include Rosie (Jean Willes), the world-wise madam who brings her operation along with the race, happily inflating prices. Sally Kirkland plays Honey, her main whore. Walter Scott plays Steve, Miss Jones' husband, estranged by circumstances that will become important. Robert Donner plays the reporter who acts as the audience's stand-in, questioning and chronicling.

For a movie that depicts its main event as pointless and cruel, "Bite the Bullet" is a surprisingly effective film that is much more than the sum of its dust-coated parts.