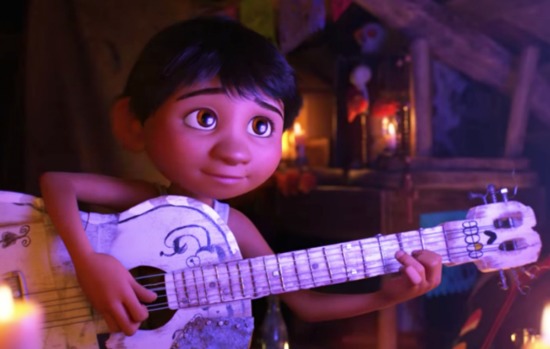 So, it turns out the 1% are living it up even in the Land of the Dead.

In “Coco,” the delightful new animated film from Disney/Pixar, we journey to the great beyond during the Mexican holiday of Día de Muertos, a day dedicated to remembering the dead. In this telling, the spirits of the dead are partying it up themselves in a fabulous city filled with color and music.

Represented as skeletons who still retain their hair and clothes, the dead have their own set of currency. And it’s not money, but memories.

If you’ve got a lot of people among the living who still remember you and place your photograph on a shrine, you get to travel back to the living to visit with your loved ones. You also get to keep the gifts they offer up to your memory, and the admiration of your fellow bags of bones.

It’s a dizzy, delightful concept from screenwriters Adrian Molina and Matthew Aldrich. “Coco” is a Latin-flavored feast of lavish entertainment that also nudges us to remember what’s most important: family. Veteran Pixar director Lee Unkrich (with Molina serving as co-director) ably guides us through an action-filled plot that pauses for a few sustaining moments of stillness and contemplation.

Anthony Gonzalez provides the voice of Miguel, the scrappy offspring of a family of shoemakers who hate music. Well, that’s not strictly true, but his great-great grandmother Imelda (Alanna Ubach) was furious when her troubadour husband ran off on her and forbade any music in their household. Trouble is, Miguel is a gifted musician who craves to release the song in his heart.

Miguel idolizes Ernesto de la Cruz (Benjamin Bratt), “the world’s greatest musician” and an Elvis-type figure who became rich and famous on the back of his movies and songs, most notably his power love ballad, “Remember Me.” (Molina, Germaine Franco, Robert Lopez and Kristen Anderson-Lopez provide the film’s wonderful songs.)

Through a bunch of contretemps I won’t bore you with, Miguel finds himself transported to the Land of the Dead, trapped to remain there forever unless he obtains the right blessing by sunrise. And that means tracking down his hero, Ernesto, who resides in a castle where the “rich” -- those revered and remembered -- are having a big fiesta.

Tagging along is his dimwitted canine friend, Dante -- a street pup who for some reason can also travel to the land of the not-living. And he picks up another companion in Hector (Gael Garcia Bernal), a clownish rapscallion who claims to know Ernesto.

During their journeys they visit the slums of the dead, where those in danger of being forgotten completely eke out a pitiable existence. Miguel and Hector also bump into other notable figures, like Miguel’s ancestors and artist Frida Kahlo (Natalia Cordova-Buckley), who gets slightly skewered.

The skeletons are visual marvels, with expressive eyeballs floating magically inside their skulls and bones that easily come apart and join back together again. For instance, when Hector needs to get down a precipice, he simply lets his body fall to the bottom and smash, then the pieces snap back together.

Be forewarned: although there’s no overt violence at all in the movie, the skeletons, themes about death and a few fearsome critters will prove scary to smaller children. My 4-year-old needed some lap time during the movie.

It’s been a rather weak year for animation, so it’s an easy to call to crown the imaginative, emotive “Coco” as the best I’ve seen in 2017.