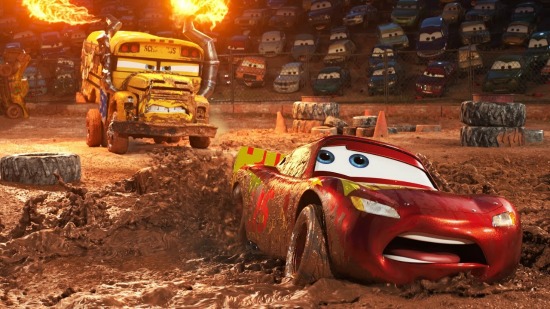 “Cars 3” didn’t do too well at the box office compared to other Pixar animated flicks, so in all likelihood it will stand as the last in the series. I’m fine with that.

The movie is a conscious closing of the loop, as brash race car Lightning McQueen (voice of Owen Wilson) finds himself in the same tires… er, shoes as his mentor, Doc Hudson. He’s now the old racer struggling against upstarts in a sport that no longer seems to want him around.

Armie Hammer provides the voice of Jackson Storm, a “next gen” racer who’s fast, relentless and uncaring. Soon Storm clones have booted all of Lightning’s old opponents to the curb, and he survives a major crash not unlike the one that ended Doc’s career. He goes into a rehab program at a fancy modern facility where his chirpy trainer, Cruz Ramirez (Cristela Alonzo), embraces him as her “senior project.”

It’s more wistful and contemplative than its two predecessors, particularly the fun-but-zany “Cars 2,” which was essentially one long Benny Hill skit with hillbilly tow truck Mater front and center. This film is about the aging process, how we deal with rough patches in life, and passing the torch to a worthy successor. In the most moving sequence, Lightning looks up some of Doc’s old friends to find inspiration.

There is still plenty of time for racing action and goofy fun, such as when Lightning finds himself caught in a backwoods demolition derby against a killer school bus, Miss Fritter.

“Cars 3” doesn’t have the pure entertainment horsepower of the first two movies, but it’s sadder and wiser.

Bonus features are excellent, though most of them come with the Blu-ray edition. The DVD has a feature-length commentary track featuring director Brian Fee and his creative team, plus a short animated film, “Lou.”

Upgrade to the Blu-ray and you add a new mini-movie featuring that smashmouth bus, “Miss Fritter’s Racing Skoool.” There are also five deleted scenes and eight featurettes touching on various aspects of production, including “My First Car,” an illustrated gallery of cast and crew talking about their first vehicle.