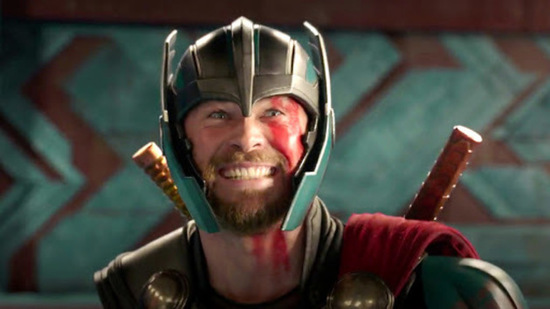 That’s not actually the title of the third solo movie with Chris Hemsworth as the Norse god of thunder. But it could be.

“Thor: Ragnarok” definitely represents a conscious change of pace for the series. Instead of a lot of the sturm and drang characteristic of Nordic mythology, it’s a fast-paced dash of quips and dizzy action. And not just Thor swinging that big ol’ hammer around: lasers, machine guns, spaceships, a bunch of other whizzbang sci-fi gadgets.

Given the film’s overtly comedic tone and setting, you’d be forgiven for thinking it got jealous of the “Guardians of the Galaxy” flicks.

In general I’m not opposed to funny super hero flicks. If I could lift a bus or conjure lightning, I’d probably be smirking a lot, too.

But it sure is a gosh dang odd choice for Thor -- especially this story, which involves the threatened destruction of Asgard, the mystical realm of Thor and the other Norse gods. Ragnarok refers to the foretold end-times for Thor & Co., not unlike the Christian Revelations.

Not exactly a ha-ha goldmine.

Directed by Taika Waititi from a screenplay by Eric Pearson, Craig Kyle and Christopher Yost, “Thor: Ragnarok” is an undeniably fun movie. It’s just that with everyone muttering throwaway jokes under their breath and pratfalls that could’ve come straight out of Keystone Kops, it’s hard for the threat of doom to land with any weight.

Take Cate Blanchett as Hela, the goddess of death, sprung from the prison where Odin (Anthony Hopkins), the king and Thor’s father, exiled her eons ago. She’s now determined to claim the throne of Asgard, laying waste to the entire kingdom if needs be. In short order she defeats Thor and his mischievous brother, Loki (Tom Hiddleston) -- destroying Thor’s mighty hammer, the token of all his power, in the process.

The two find themselves stranded on the other side of the galaxy on Sakaar, a garbage world at the center of a bunch of time-space portals. This is a crossover from the “Planet Hulk” comics series a decade or so ago, and I’m not giving away anything by stating that Big Green makes a prominent appearance in the film, with Mark Ruffalo playing his human counterpart.

We get to see another scrappy Thor/Hulk faceoff, this time in the gladiator ring. It’s much more than just a cameo, as opposed to Doctor Strange (Benedict Cumberbatch), who makes a helpful (if annoyed) appearance.

(During his slave stint, Thor gets his signature long blond locks shorn off, revealing a short brown ‘do. Now everybody, not just his hairdresser, knows for sure. #FakeBlond)

Sakaar is ruled by the Grandmaster, whose main occupation seems to be finding fodder for his Contest of Champions. He’s played by Jeff Goldblum as a sort of vaguely malevolent, distracted poof -- the sort of guy just begging for a revolution.

Tessa Thompson plays a doughty bounty hunter with an unexpected past. Director Waititi also has a motion capture role as a rather sturdy fellow gladiator. Karl Urban plays Scourge, an Asgardian whose name is his destiny, or maybe not.

Meanwhile, back on Asgard the celestial watchman Heimdall (Idris Elba) is leading the resistance, vexing Hela. She has the ability to generate swords and other projectiles seemingly at will, not to mention transform her ebony mane of hair into a helmet of barbs. She’d be a pretty chilling villain, if she weren’t dropping droll one-liners of her own -- the Garbo of the gods.

Combining the sword-and-sorcery setting of Thor with a science fiction world of aliens and cool technology is a terrific idea. They maybe should have stopped there before layering in all the clown show stuff. But I guess even gods secretly want to be comedians.