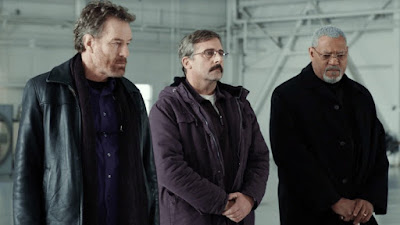 Just a short review today, as I'm in the midst of the holiday/awards season rush and watching movies at a brisk pace.

"Last Flag Flying" is pretty much writer/director Richard Linklater's attempt to do his version of "The Last Detail," the seminal 1973 film that helped launch Jack Nicholson's career about a pair of soldiers taking a comrade to military prison. It's a physical and metaphysical journey. Though instead of young bucks, we follow a trio of former Marines 30+ years after they served in Vietnam.

Steve Carell, Laurence Fishburne and Bryan Cranston all give very naturalist, lived-in performances as once-close buddies who have gone their separate ways. Larry "Doc" Shepherd (Carell) was the youngest of the bunch (he technically served in the Navy) and the meekest, and still is. Richard Mueller (Fishburne), once known as "the Mauler" for his outrageous behavior, has become an easygoing reverend with a bum leg. Sal (Cranson) is the least changed of the bunch, a party animal and womanizer who is constantly cracking jokes and drinking.

The reason for their ad-hoc reunion is tragic: Doc's only child has died while serving with the Marines in Iraq, and he wants his old buddies with him to pick up the body and bury him. The story is set in 2003, and there is a caustic political tinge that marries the two wars -- how the government uses its fighting men poorly, then lies to their families about the true nature of their mission and their deaths. Darryl Ponicsan, upon whose book the movie is based, co-wrote the screenplay with Linklater.

The movie is essentially one freewheeling two-hour-long conversation, as the men make their way by car, train and bus on a circuitous trip to and from the military base. They talk about their lives, their marriages and relationships, their disappointments. Old memories are shared with warmth and laughter, like good scotch swirled in a favorite tumbler.

Much is spoken, but much is also left unsaid. There was a terrible event that occurred during their service, which resulted in another Marine dying and Doc serving time in the military brig for two years. The details are left hazy.

Cranston has a lot of fun with his part, the extroverted loudmouth who spends much of the early going trying to get a rise out of the good reverend. (He does.) He leans a little too heavily on a stumblebum accent replete with "deez" and "doze."

Carell is the polar opposite, quiet and polite, though he shows some determination with regards to the disposition of his son's resting place. Fishburne is charismatic and centered, and the film lets him talk about his faith without the usual winking or mockery.

J. Quinton Johnson plays Washington, a young Marine who served with Doc's kid and ends up accompanying them on part of their trip. Yul Vazquez plays the colonel in charge of the grieving detail, whose politeness masks other impulses.

"Last Flag Flying" was touted as a contender for the awards season, and while I liked it quite a bit I don't see it as being in that stratosphere. It's a sad, funny portrait of soldiers still coming to terms with who they were as youngsters, and the old men they are slowly becoming. It's intimate, insightful and never hits a false note.

Posted by Christopher Lloyd at 10:04 AM