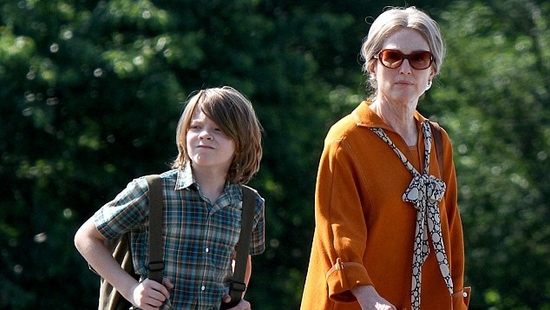 "Wonderstruck" is the sort of film you admire more than you love.

Directed by Todd Haynes ("Carol") from Brian Selznick's screenplay based upon his own book, this odd but occasionally enchanting film follows two children, each about age 12, going on a journey of discovery 50 years apart. Their divergent paths increasingly converge, as they make their way to New York City and specifically the Museum of Natural History.

Oakes Fegley plays Ben, a kid from Gunflint Lake, Minnesota in 1977, while Millicent Simmonds plays Rose, a girl from 1927 Hoboken. Both are afflicted with the same medical condition that leaves them feeling estranged and shut off from those around them. Each ends up running away from home, as the film cross-cuts between their stories.

For added effect, Rose's tale is related in the style of a film of her era, which is to say black-and-white, little sound beyond accompanying music and motion that's a little jumpy, as if shot on a slower shutter speed.

I don't want to give away too much about their individual stories, since the entire point of the film is to dribble out this information and leave us guessing as to the connection we suspect the two children share.

But a little is possible. Rose is mesmerized with Lillian Mayhew (Julianne Moore), a major star of screen and stage, and is determined to meet and confront her. She flees her stern, controlling father (James Urbaniak) and heads to Broadway.

Ben lost his mother, the town librarian (Michelle Williams), to an accident a little over a year ago and is struggling to fit in at school and in the home of his aunt and uncle. He finds an old museum book, "Wonderstruck," that went along with an exhibition from long ago. A bookmark inside gives him a cblue to the whereabouts of the father he has never known, so he climbs aboard a bus to the big city.

Haynes plays up Ben's estrangement in the New York of 40 years ago -- grimy, vibrant, diverse, exhilarating and frightening. He suffers setbacks in his quest but also meets another boy, Jamie (Jaden Michael), who offers help and friendship.

"Wonderstruck" is a beautifully shot film, and the performances by the two main child actors are excellent. Julianne Moore is, of course, always Julianne Moore, which is to say vibrant yet subtle.

In the end the plot becomes a little rote, as the entire film's energy polarizes around solving a puzzle that the audience will unlock long before the film gets around to depicting it. As I often say, it's never good when the audience is sitting around waiting for the movie to arrive.

But just the experience of watching the film go by is worthy in of itself, a feast of sights and sounds with children as our guides, wandering and wondering.

Posted by Christopher Lloyd at 2:11 PM