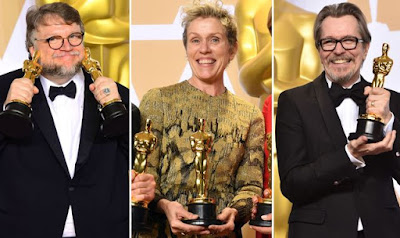 They started the 90th Academy Awards ceremony a half-hour earlier but still didn't wrap things up until nearly midnight. I'm an Oscars junkie, but four hours is just too damn long for an awards show. Suggested areas to cut:
Overall, I was pretty happy with how the awards played out. Not a whole lot of surprises... which is in of itself, something of a surprise. I was planning on at least one Mark Rylance-style out-of-the-blue win.

I managed to run the table in my predictions in the "major" categories (Pictures, Director, screenplays, all four acting awards) but didn't do so great among the more technical awards. I got 15 out of 24 categories correct, which is about my average.

Short films continue to be my bane, missing on all three. In my defense, these are notoriously hard to predict as they're usually not screened for general audiences, and there's little buzz about them in the run-up to the Oscars. There's also no preliminarily awards (SAG, Golden Globes) with short film categories to make it easier. As opposed to, say, the Director's Guild Award, which almost always predicts the Oscar winner.

As often seems to be the case, I had the luck of having my preferred film win in a category in which I predicted another movie to win. Thus I was very pleased to have my favorite of 2018, "Blade Runner 2049," walk away with two wins for Visual Effects and Cinematography. Roger Deakins, arguably the greatest living D.P., finally got an Oscar after 14 tries. And it wasn't just a "it's his turn" gimme: no other film approached the visual splendor of "Blade Runner 2049."

There were a handful of head-scratchers, though. I thought "The Silent Child" the weakest of the live-action shorts (thought it was still good). Similarly, I felt "Heaven is a Traffic Jam on the 405" to be the least deserving of the documentary shorts. "Remember Me" is a rather forgettable Best Song standard bearer. I still contend "Icarus" is a rather disjointed documentary.

As far as the speeches go, there were some good ones and some OK ones. No instant classics like Matthew McConaughey's stem-winder a while back, though Frances McDormand came closest. She was brave and angry and true and genuine. And she got millions of people to Google "inclusion rider," only to find very little available online. I bet there's a lot more information out there today.

In terms of the politics, I actually thought most of the ceremony hit a nice balance between indignation, humor and righteousness. Nothing too egregious. About the only bit I didn't care for was Emma Stone introducing the director nominees as "four women and Greta Gerwig," because that's deliberately denigrating four artists at the expense of another one. And that's with Gergwig as my preferred pick to win that category.

Speaking of which, I am disappointed that "Lady Bird," my #2 film of the year, got blanked on wins, though I wasn't surprised by it. I thought Gerwig had a shot at Original Screenplay, but the cultural impact of "Get Out" was bound to prevail. The one that truly hurts is Laurie Metcalf losing Supporting Actress to Allison Janney. Janney was fine in a broadly written comedic relief role. But Metcalf really got down in to the bones of her character.

A lot of people seem to favor Jimmy Kimmel as host, but I'm rather indifferent. I'd like him more of he stuck to zingers and stopped trying to do comedic set-pieces, like the theater visit or the jet ski giveaway. My take on emceeing is you're there to facilitate the ceremony, not try to recreate a version of your own thing on somebody else's dime. Personally, I'd give the job to Billy Crystal until they have to roll him out on a stretcher.

It'll be interesting to see how "The Shape of Water" holds up as a Best Picture winner. I adored it, but it's a very atypical pick for an Academy that tends to look stiff, serious historical pieces, with something like "The King's Speech" having the classic Oscar pedigree.

"Shape" is difficult to even pigeonhole -- is it a horror film? Fantasy? Romance? Comedy? Musical? Historical parable? A bit of all of them, I'd say, on top of being a magnificent exploration of not one but six or seven characters. The love for Guillermo Del Toro was palpable in that room, and I think it's genuine respect for an artist who makes movies unlike anybody else's.

(Well, let's see how that plagiarism lawsuit turns out...)

Posted by Christopher Lloyd at 10:59 AM