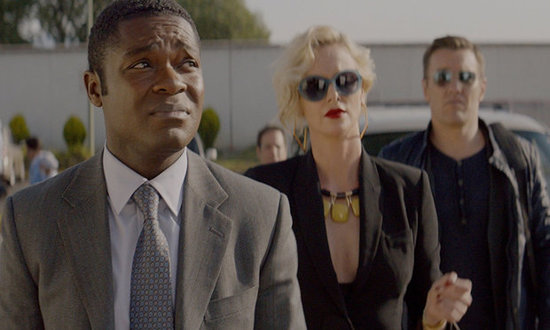 "Gringo" is a strange movie, and a hard one to review. I didn't particularly like it. Didn't particularly hate it, either. If there's a cinematic equivalent of eating a sustaining meal without ever really tasting your food, this is it.

I think it was going for a mix of comedy, action and intrigue, perhaps along the lines of "Midnight Run." Certainly, it did not achieve this.

The most notable thing about the movie is how forgettable it is... quite literally. I saw the film last night, got busy with other things, and forgot that I had to write this review.

Charlize Theron is pretty much the only thing interesting or compelling about it. She plays Elaine Markinson, the co-president of a shady pharmaceutical company that is developing a pill that copies the psychotropic effects of marijuana, while also playing footsie with the Mexican cartel on the side. There's a scene where they pitch the drug to an even bigger company, talking about how rapidly marijuana is becoming legalized.

I kept waiting for someone to ask why if pot is heading toward universal legality, anyone needs to buy a pill that simulates it?

Anyway, Elaine is a real piece of work, a land shark with absolutely no regard for others. Swims, eats, and f*cks, baby.

There's a pivotal scene where she berates herself for momentarily showing signs of basic humanity, which she interprets as weakness. A former beauty queen who enthusiastically wields sex as a weapon, Elaine divides the world into winners, and everybody else. "Guilt is for losers" is her mantra.

Her partner is Richard Rusk (Joel Edgerton), her gender opposite but spiritual mirror, so there's no surprise the two are carrying on an affair. Though the word "affair" connotes some sort of emotional connection, of which neither is capable. Richard is the type of guy who, when he's thirsty, doesn't bother asking his secretary to fetch him something, simply bellowing into the intercom, "I'm thirsty."

The ostensible main character is Harold Soyinka (David Oyelowo), a Nigerian immigrant who has discovered the American Dream isn't what it's cracked up to be. Married to a spendthrift (Thandie Newton, utterly wasted) who has driven them deep into debt, Harold is the quintessential white knight, a guy who believes that those who do good will find it returned to them.

Harold believes Richard is his friend, who gave him a job out of kindness. He couldn't be more wrong.

The running joke is that everybody in the movie is on some level out to get Harold. He's the patsy, the pushover, the naïf, the guy who's kept in the dark until it's time to pin something on him. Even one character, who shows up rather late in the game and whose mission is to save Harold, ends up trying to turn the screws to his advantage.

Harold has been making regular trips down to Mexico to oversee the company's operation there. Some inventory has turned up missing, which concerns him. He's also heard the company, Prometheon, may be swallowed up by a much larger competitor and he'll likely be out of work. Still, he soldiers on, doing good by everyone he interacts with -- even bringing Chicago barbecue to their head of security south of the border (Yul Vazquez).

What he doesn't know is Richard and Elaine have been secretly selling part of their stock to a Mexican drug lord. On the latest trip down south, things go awry, some blood is spilled and Harold is made wise to all those who have betrayed him.

Finally growing some moxie, Harold remembers the company has a kidnapping insurance policy for their executives, and hatches a scheme to blackmail them for $5 million. But it turns out Harold is worth more to them dead than a live, and soon it's all chase-chase and bang-bang.

Sitting on the sidelines of the story, without ever really providing a clear view of their role in it, are Amanda Seyfried and Harry Treadaway as Sunny and Miles, American tourists who have an ulterior purpose for their trip to Mexico.

Sharlto Copley turns up as a mercenary hired to rescue, then kill, Harold. He's recently had a change of heart and vocation in his own life, but we'll see if his newly kinder, gentler instincts will prevail.

Directed by Nash Edgerton (Joel's brother) from a script by Matthew Stone and Anthony Tambakis, "Gringo" is the sort of cinematic fodder that arrives in between behemoth releases, and is quickly crushed and forgotten. And probably deserves to be.

Posted by Christopher Lloyd at 4:11 PM