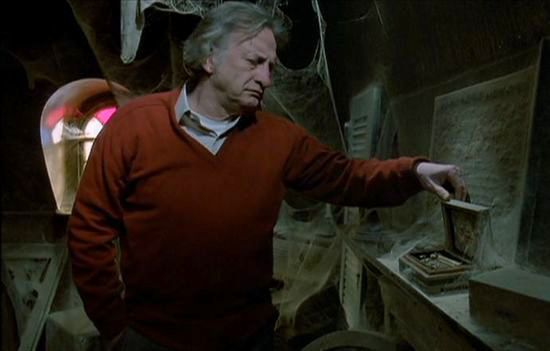 "The Changeling" has an impeccable cinematic pedigree. Not to be confused with the 2008 drama starring Angeline Jolie, this was a horror/thriller featuring George C. Scott as a famous composer who discovers strange things going bump in the night in the old mansion he has rented out.

In the tradition of all haunted house stories ever, rather than immediately decamping upon realizing the threat, he stays and tries to puzzle it out. Because, of course, otherwise we wouldn't have a movie.

(Though some aspects of Eddie Murphy's stand-up days are now considered impolitic, I still think he best nailed it on haunted house movies.)

In addition to Scott, who was then at the height of his powers, the movie also features Golden Age screen legend Melvyn Howard in his next-to-last role, playing (we eventually learn) the titular character. Scott's real-life wife, Trish Van Devere, co-starred with him as a helpful local and hinted-at love interest. Director Peter Medak was (and still is) a busy, respectable maker of film and television.

A Canadian production, "The Changeling" cleaned up at the first-ever Genie Awards, their equivalent of the Oscars, winning best picture as well as the prizes for adapted screenplay, cinematography, sound, sound editing and art design. Amusingly, Scott and Van Devere also won Best Foreign Actor and Best Foreign Actress, respectively.

(Native Canadians Christopher Plummer and Kate Lynch won Actor and Actress, with all others dismissed to the furriner categories.)

So with all that said, I was tremendously disappointed in the movie. The first hour is stultifyingly boring, largely consisting of Scott puttering around the enormous mansion, reacting to noises, peering quizzically at objects. Somehow, he seems to wear a sportcoat, sweater vest and tie in every scene, to the point I wondered if he sleeps in that outfit.

He's playing John Russell, a well-known music composer who has just suffered the tragedy of losing his wife and young daughter in a car accident. He leaves New York City to take a job in Seattle teaching at a local university, to quiet his mind and get away from it all.

The local historical society decides to rent him the Carmichael mansion, which has been vacant for more than a decade, though no one will say why. It's demonstrably ridiculous for one middle-aged man to occupy such a huge space -- four stories and dozens of rooms -- but the place comes with a cool old piano for Russell to noodle upon.

Though it's a supernatural thriller, "The Changeling" doesn't have that dizzying aspect of serendipity about it, as if any number of metaphysical possibilities abound in this place. When we finally learn "the secret" of the haunting, it becomes a mundane story of greed and power. Douglas plays a tycoon and U.S. senator who turns out to be an orphan raised in place of the actual Carmichael son, who was murdered by his father for being born sickly.

(Sorry, the sell-by date on spoilers for 1980 movies has long passed.)

Russell does the usual stuff -- poring through historical records, talking to oldsters, holding a seance at which objects go flying. But it's not until he listens to a recording of the seance that he starts to hear the voice of the boy, pleading for mercy.

Perhaps the film's only truly scary scene is the one in which the murder is depicted, as the father goes into the attic room where the child has been hidden away and drowns him in his bathtub.

The story is supposedly based on the actual experience of a playwright who moved to Denver in the 1960s, and events played out more or less the way they are shown in the film, right down to the hidden body and gold medallion the child wore.

Coming more or less in the middle of Hollywood's haunted house/possession heyday -- "The Exorcist," "The Amityville Horror," "Poltergeist," etc. -- "The Changeling" is the stodgy uncle that wants to hang with the cool kids, knowing the words but not the music.