Video review: "The Shape of Water" 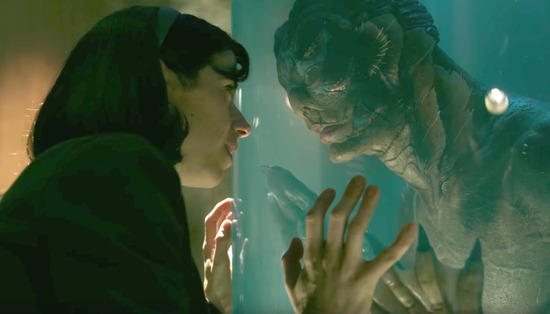 One of the best thing about Guillermo del Toro’s movies is they’re so difficult to cram into any box. Is it a horror film? Science fiction? Romance? Historical parable? Fairy tale? Musical comedy?

All of the above, I’d say. After its impressive win at the Academy Awards last week, “The Shape of Water” will surely go down as one of the kookiest Best Picture winners ever.

Sally Hawkins plays Elisa, a mute woman who works as a cleaning lady in a secret government laboratory circa the early 1960s. Her world is tightly bookended: the routine of her job, her friendship with Giles (Richard Jenkins), the gentle illustrator who lives next door, and another with Zelda (Octavia Spencer), who works with her in the dank underground facility.

One day, a strange aquatic man is brought into the lab, where he’s prodded and tortured like a curious science experiment. But Elisa befriends the creature, and even learns how to communicate with it using sign language. She discovers there is a gentleness behind his fearsome exterior, which is like a cross between the Creature from the Black Lagoon and a space alien.

Hawkins, Spencer and Jenkins all received acting nominations at the Oscars, and the movie could easily have gotten three more. Michael Stuhlbarg plays the chief scientist with conflicting impulses and loyalties; Michael Shannon is chilling as the military man running the operation, who sees the aquatic man as just another fish to be cut up; and Doug Jones, who elegantly plays the creature with the help of an elaborate costume and some CGI.

Perhaps the thing I liked best about “The Shape of Water” is that it manages to not only incorporate these six characters into the story, but it actually lets the audience follow each of them for a while, seeing how they became the people they are and how they will interact with each other, in commune or in conflict.