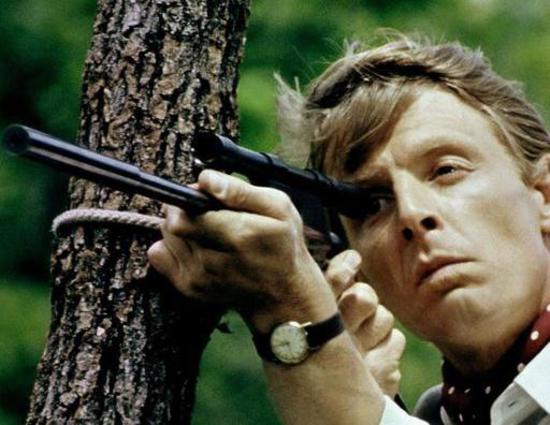 "The Day of the Jackal" was my father's favorite film. Or I should say it is his favorite film. I'm not sure what the proper term to use is when the person is no longer with us but the movie endures.

I'd like to think that love survives death, whether for another person or a work of art, so we'll choose the present tense.

The film has just been released in a gorgeous Blu-ray special edition out Sept. 25 that includes plenty of nifty bonus material.

I saw it with him first on HBO when I was about 10 or 11 years old, and my lifelong love of cinema was already in full bloom. I remember sitting together in our living room, him on his recliner in the corner and me lying on the ground directly in front of the TV with my head propped against a triangular pillow, my usual spot. Several other viewings took place together over the years.

He, and I, adore the absolute leanness of the narrative. Even at 142 minutes, there is not an ounce of fat in this spy thriller about a British assassin hired by French insurgents to kill President Charles de Gaulle in the summer of 1963. It's essentially a crime procedural, but instead of following the investigators as they look into a deed already committed, it's a parallel race as we track the titular killer striving to finish his contract while an international cadre of law enforcement types scrambles to prevent it.

Many movies would go on to copy this style, including 1993's "In the Line of Fire." Although there is a cast of hundreds, the story very much focuses on two figures just like the Clint Eastwood film, the assassin and the man leading the hunt. Though here there's no ongoing taunting between hero and villain as they engage in their intricate dance, only meeting at the very end.

Indeed, the film has such an incredible sense of verisimilitude, weaving actual events and locations in with fictional ones, that I had long assumed it was based on a genuine assassination attempt. In fact, the inspiration comes from the 1971 fictional novel by Frederick Forsyth, adapted for the screen by Kenneth Ross and directed by the great Fred Zinneman ("High Noon," "From Here to Eternity").

This is perhaps the signature role of Edward Fox's career, displaying an icy charm as the Jackal, aka Charles Calthrop, known as the best hit man in England, and perhaps the world. He's a chameleon-like figure, putting on and taking off identities like changes of his well-tailored suits. A compact man with a lean, boyish figure and feathered blond hair, the Jackal is as suave as anyone who's played James Bond.

The strength of "Jackal" is that we find ourselves rooting for the Jackal and his nemesis, Deputy Police Commissioner Claude Lebel (Michel Lonsdale). Like the Jackal, Lebel displays a single-minded commitment in his pursuit of his goal, literally sleeping in his office for weeks on end, assisted only by his loyal number two (Derek Jacobi).

Both men also have a tendency to be curt and impatient with those who stand in the way of his goals. The difference being that the Jackal simply kills anyone who opposes him, while Lebel hunkers down and burrows into the weak spots of the bureaucracy.

No doubt my dad's favorite moment of the film comes late when Lebel reveals the leak within the cabinet of French ministers who have been sworn to secrecy on the affair. One of them had been seduced by an insurgent spy, and Lebel plays a recording of her feeding information from his phone. Confessing his weakness, the guilty man leaves the meeting abruptly (and later commits suicide).

The ministers are pleased, having been generally dismissive of Lebel, seeing him as a low-level flunky -- not a government official but a gumshoe cop. As the meeting is breaking up, the haughty chief minister (Alan Badel) asks him how he knew which of their personal phone lines to tap. Not even bothering to look up from his papers, Lebel states that he couldn't know which of them was the source of the leak, so he tapped all of their phones.

Zinnemann holds this moment for the briefest of seconds, just long enough to register the shocked faces of the high and mighty. In our shared viewings, this was always followed by my father's high-pitched cackle of glee.

I won't bother with a detailed plot synopsis. Suffice it to say, members of the OAS -- a real splinter group of French military enraged by de Gaulle's decision to grant Algeria independence -- hire the Jackal after their own assassination attempts fail and they are forced into hiding in Rome.

He's a one-man show, doing all the planning and scouting personally. His only help is a weapons expert who creates the nifty collapsible rifle that can be disguised as a pair of crutches, and a pornographer who makes false ID's on the side. The latter tries to bribe the Jackal out of an extra £1,000, and finds himself stuffed into a locker for his trouble.

As he executes his intricate plan, the Jackal moves from England to Italy to France, swapping out vehicles and passports as needed. He even displays a pan-sexual mercenary attitude, seducing both a wealthy married woman (Delphine Seyrig) and a young gay businessman (Anton Rodgers) when he finds the need to hide out from the authorities. In the movie's historically accurate depiction of 1963, the only way authorities had to track tourists' movements was through hotel guest cards, picked up manually by motorcycle police.

"The Day of the Jackal" is not a character study, but the film does find ways to penetrate the interiors of its chief two characters. The Jackal's cover is blown early in the execution of the plan, yet he stubbornly continues with the attempt, even knowing he's a single man arrayed against thousands of Europe's best law enforcement officers.

Why? Partly it's personal arrogance, of course, but we also sense a large helping of professional ambition. In his initial meeting with the OAS leaders, the Jackal demanded a payment of $500,000 (just over $4 million in today's dollars) with the justification that whoever pulls off the job "can never work again." In other words, whether de Gaulle lives or dies the Jackal knows that his career as an international assassin is over -- and he's rather go out with a win.

Taut, supremely entertaining and with never a dull moment, "The Day of the Jackal" may not be one of my all-time favorite films. But I can't disagree with my dad -- it deserves its place as one of the best thriller ever made.