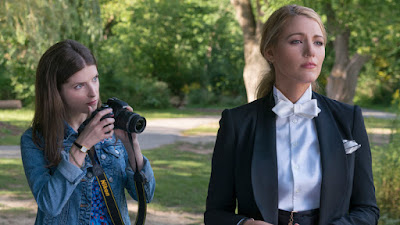 "A Simple Favor" is not a particularly good film, but it is an interesting one. Sometimes it's better to to be mediocre and interesting than decently unoriginal.

At first I thought this was going to be a romcom. Anna Kendrick plays a mommy vlogger who becomes ensorceled with a beautiful, bitchy mother of one of her son's 1st grade classmates, played by Blake Lively. I figured it would be an odd couple romp as they bond while dealing with various man issues.

There is indeed bonding and romantic entanglements, but they're a sideshow to what is essentially a comedy whodunit.

Tonally, this is a brash outlier movie. Coming from director Paul Feig ("Bridesmaids," "Spy), it appears at first blush to be a broad R-rated comedy with the ladies spouting a lot of filthy talk. I haven't read the book it's based on, though it's been compared to "Gone Girl" and "The Girl on the Train" -- pretty much the polar opposite of funny.

But screenwriter Jessica Sharzer, adapting the novel by Darcey Bell, layers in plenty of laughs even as she introduces film noir elements as the two women trade roles as admirer and admired, pursuer and pursued. There are a couple of head-whipping plot twists, though they aren't hard to guess if you've been paying attention.

It starts out fun and flirty, then turns darker, and then darker still, though there are still laughs spliced in between the doom and gloom.

Kendrick plays Stephanie Smothers, a widowed single mom to adorable Miles (Joshua Satine) who makes helpful videos aimed at other mothers. She's sort of a downmarket Martha Stewart, living in quaint (fictional) Warfield, Conn., a New York City exurb. The other moms of their class see her as this busy bee of energy, friendly to everyone but close to no one.

Then she meets the mom of Miles' pal Nicky (Ian Ho), the class troublemaker. Emily Nelson (Lively) is everything Stephanie is not -- tall, flawless, rich, self-confident, careerist and seemingly indifferent to the joys of motherhood. She wears swank suits with vest pocket chains, fedora hats, ladybug shoes and a permanent smirk.

After some play dates and lots of gin martinis, they're soon fast friends. Stephanie is deferential and apologetic, and Emily acts as her muse and mentor to live larger. Emily is like a caricature of feminism: controlling, manipulative, arrogant. We would hope Stephanie would be smart enough to see through her facade to the depth of her problems, but then we wouldn't have a movie.

Without giving too much away, suffice it to say that Emily suddenly disappears after leaving Nicky with Stephanie. Her husband, Sean (Henry Golding), a once-promising writer, was away in London and wasn't aware she vamoosed. Her posh clothing designer boss (Rupert Friend) though she was on a business trip in Miami.

Soon the police are brought in, Stephanie's vlog becomes a hit when she starts doing updates on Emily's case in between making friendship bracelets, and the web of suspicions quickly spreads.

There was a point about two-thirds of the way through the movie where I was literally scratching my head, wondering what the heck was going on and where the film was heading. It felt schizophrenic and weird. But it was also on some level enervating to watch a movie that keeps throwing wild haymakers at you. Many of them don't land, but some do.

I can't exactly recommend "A Simple Favor." But it's a sporadically entertaining flick that has something to say about the state of the mommy wars.