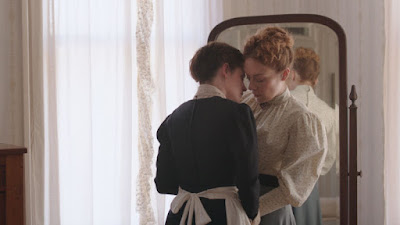 Chloë Sevigny and Kristen Stewart are beautiful women with tired eyes. In “Lizzie,” their characters seem to be sleepwalking through life, addled and awry, as if dreamers hoping desperately to awake from a nightmare.

You may have heard that this is a movie about famed axe murderess Lizzie Borden. What you may not know (I didn’t) is that Borden was acquitted of killing her father and stepmother, returned to her hometown and lived out the rest of her days there. Think about that.

In this fictional (?) version of events, director Craig William Macneill and screenwriter Bryce Kass focus on the romantic relationship between Lizzie (Sevigny) and the family maid, Bridget Sullivan (Stewart). A 1984 novel had supposed a lesbian affair between the two and the discovery of the tryst as the trigger for the murders. (The film’s credits curiously do not attribute the book.)

Here Andrew Borden (Jamey Sheridan) is the true villain, a dictatorial patriarch who treats Lizzie and her sister, Emma (Kim Dickens), as chattel, embarrassing old maids who continually defy and vex him. He also takes liberties with Bridget in her attic bedroom at night, as an Irish immigrant in 1892 Massachusetts was treated as little more than an indentured servant.

The first half of the movie plays out as a tortured romance, while the second half is a whodunit as we witness the consequences of the crime and flashbacks to the actual killings.

I found the scenes between the two actresses more interesting than the crime-and-punishment stuff. They resist the magnetic attraction toward each other, captives of their time and place that looked upon such love as blasphemy, not to mention the yawning class distinction between them.

It’s a compelling dance, as they struggle against their feelings and drown in the anxiety created by denying them.

The Bordens were not a happy clan. Wealthy but emotionally distant, Andrew had remarried a few years after his wife’s death. The daughters remained aloof to their stepmother, Abby (Fiona Shaw). Lizzie refuses to call her mother, though she sticks up for her stepdaughter against the worst of her husband’s cruelties.

To wit: At one point, Andrew is enraged after Lizzie steals and pawns some jewelry, and exacts his revenge by beheading all of her beloved pigeons, one by one. Then he orders Bridget to roast them up for dinner. It’s quote a gothic horror scene.

Once the elder Bordens are dead, the movie loses quite a bit of steam. I think it would have been more interesting to keep the matter of Lizzie’s guilt tucked away from this story, concentrating on why she might have been tempted to do such a thing, and how the case became one of America’s first murder media sensations.

Still, we must consider the movie made rather than the one we wish for.

“Lizzie” is at times compelling and other times listless, a look back at a grisly bit of history that has become a gag, and tries to flesh out the human lives involved. It may not be true, but this is as good an explanation as any for hacking people up with a hatchet.