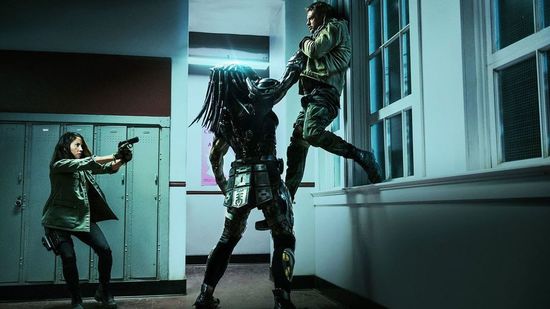 More than 30 years ago we had “Predator,” followed by its sequel, “Predator 2,” then “Alien vs. Predator” and its sequel, then the 2010 reboot, “Predators,” and now its sorta-sequel, “The Predator.”

Forget about whether any of these movies have been any good since the first one -- hint: they haven’t -- could we at least get some more interesting titles? What’s next, “A Predator?” “La Predator?”

The new one is directed by Shane Black, a longtime screenwriter of action movies who segued to directing a few years back. (A lot of people liked his “The Nice Guys,” but I didn’t.) With this movie, Black -- who co-wrote the script with Fred Dekker -- has achieved a level of discombobulation heretofore unseen in theaters.

Good luck following this story. The movie plays out as a bunch of people shouting a bunch of gibberish at each other, followed by shootouts and disembowelings, which somehow leads to more gibberish.

It seems the alien hunters with faces like a Venus fly trap and Rastafarian dreds are returning to Earth for the umpteenth time. A nasty quasi-governmental agency known as Project Stargazer wants to get their hands on the predator tech, which as you’ll recall can do things like turn you invisible or shoot lasers from a nifty little shoulder launcher.

A special forces dude named Quinn McKenna (Boyd Holbrook) helps capture a predator who has crash-landed in Mexico, yet for some reason this results in him being thrown into military prison by the Stargazer folks. But not before he ships the alien’s helmet and wrist controller to his P.O. Box in the States, which makes me think that when the post office worker tells me they may scan or inspect my packages that they’re just blowing a lot of smoke.

The tech ends up in the hands of his son, Rory (Jacob Tremblay), who is on the autism spectrum but is also brilliant. Quinn breaks out of prison with the help of a bunch of other military castoffs. Soon it turns into a big chase-chase-chase movie with the Stargazer goons chasing Quinn who’s running but also chasing the predator who’s chasing his son.

This is a really terrible movie with a really good and interesting cast. In addition to Tremblay (“The Room”), Keegan-Michael Key plays Coyle, one of the military misfits helping Quinn. Olivia Munn is the brilliant scientist who also knows how to shoot any kind of gun. Thomas Jane is Baxley, an unlikable mook with Tourette’s Syndrome.

Sterling K. Brown plays the Stargazer chief, who dresses very casually for a mastermind. He and Quinn can’t seem to decide if they hate each other or want to share beers and Bromance.

I also thought Gary Busey had turned up as a goofy scientist, but it’s actually his son Jake. I said this can’t be, that’s Gary Busey’s kid, but turns out Jake is creeping up on 50, and doesn’t that make us all feel old.

“Predators” is a very poorly staged action film. It looks as if Black directed the movie while looking in a mirror over his shoulder.

There’s a lot of gory violence, with intestines galore. And alien dogs that turn nice if you shoot them in just the right spot. I also learned that you can kill a predator with a bullet to the face, but something like 20,000 shots don’t hit him in the head until the one that does.

If you like a heaping helping of stupidity along with eviscerations, then this is your flick. As for me, I’m holding out for “Six Degrees of Separated Predator Heads.”