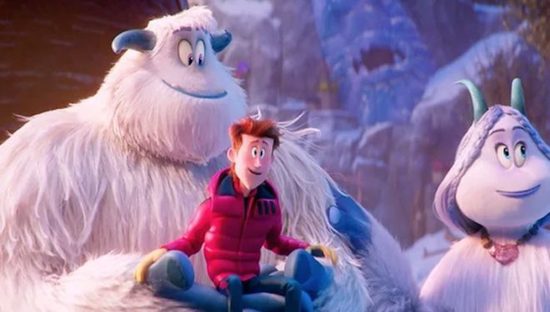 Everybody’s a monster to somebody.

In this age of peak tribalism, people tend to cluster in like groups and don’t question the precepts of what they’re told. Especially for those whom life is good, it’s easy to stay in the bubble and enjoy. Everyone else is a potential enemy.

That’s the message of “Smallfoot,” a modestly entertaining animation flick that will certainly thrill wee ones more than adults. I found the themes heavy-handed and the pacing rather draggy.

I bet kids under age 10 will love it, though, and that’s who it’s aimed squarely at.

Channing Tatum, really reaching for the upper register of his voice, plays Migo, a young yeti -- as in bigfoot, sasquatch, etc. It turns out bigfoots (feet?) are real, and living in bliss at the top of a cloud-covered mountain the Himalayas. Daily life is a pleasant grind of chores, some of which make little sense, and good times.

Migo goes about 20 feet tall, has luminous ivory-colored fur, no nose and two horns on his head, one broken. He sort of resembles a distant cousin of Sully from the “Monsters Inc.” movies.

Migo’s dad, Dorgle, is the head gong-ringer, whose job is to be catapulted across the top of the village each daybreak and smash his head into the giant gong that beckons the emergence of the sun, which in their lore is a sun-snail traveling across the sky. (Sounds loopy, but it isn’t worse than some human mythology I’ve heard.)

Time has taken its toll: Dorgle is rather short for a yeti -- Danny DeVito does the voice; get it? -- but used to be taller than the towering Migo. Soon he will pass the mantle to his enthusiastic son.

The yetis have their laws written in stones, quite literally. Their leader is the Stonekeeper (Common), who wears tiles of stones formed into a robe, each one inscribed with a truth that goes unquestioned. The weight of the law is a real thing in this case. “It takes a strong backbone,” Stonekeeper says.

Chief among their laws is, “There is no such thing as a smallfoot,” which is their word for humans. You might think it odd that there is a law just to disprove a negative, and there are a few quiet naysayers amongst the yeti. Among them is Gwangi, the largest of their kinds voiced quite well by LeBron James, and secretly their leader is Meechee (Zendaya), the Stonekeeper’s daughter.

Migo meets up with a smallfoot but his claims are discredited and he is banished. In his exile he journeys to the human town below the mountain and bumps into Percy Patterson (James Corden), a schmaltzy British wildlife broadcaster. Think Steve Irwin, but less brave and more annoying.

His plan was to fake a yeti sighting to save his fading career. So when Migo carries him back to his village as proof, it’s a boon to them both.

I liked how screenwriters Clare Sera and Karey Kirkpatrick (the latter also directed) handle the language barrier. To the humans, yetis sound like roaring bear-lions; to the yetis, humans make squeaky mouse-talk.

There are several songs in “Smallfoot,” though I’d call this more a movie with musical interludes than a straight-up musical. By far the best is “Let It Lie,” with Common rapping out the hidden history of the yeti.

A middling bit of animation, “Smallfoot” is built for small children to love and parents to endure. Business proposal: movie theaters start featuring double bills in which grownups drop off their kids to see this in a supervised theater while they pop next door for something more to their tastes.