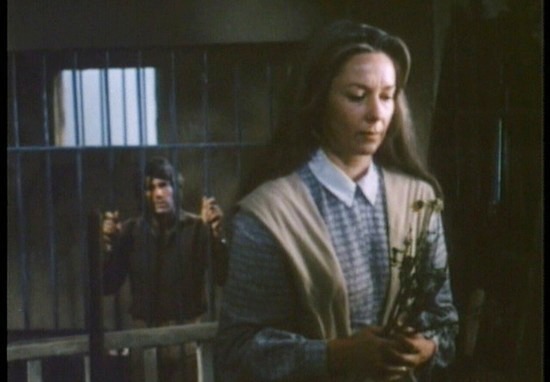 "Well, you ain't much. But you're a helluva lot better than nothin'."
--John Lawler


I'm not sure if "Molly and Lawless John" fits in with the so-called "Acid Western" genre that I've only recently stumbled across. I'm starting to get the sense that it's a very loosely defined collection of films that spanned only a handful of years. It seems more like an idea that was only retroactively applied to a very disparate sort of cowboy pictures.

The late, great Pauline Kael coined the term in her 1971 review of "El Topo," which I think may be the only movie everyone can say without reservation deserves that label. Maybe also Jim Jarmusch's much-later "Dead Man" -- a film that receives the highest critical censure I have to offer: "unwatchable."

"Molly" is interesting for a few reasons. First, it features Sam Elliott in one of his earliest starring roles. Like Spencer Tracy and a handful of other fine actors akin to himself, Elliott seems like he was born middle-aged, his mien gaining more and more character as it assumed an increasingly craggy appearance.

But here he is, still in his 20s, smooth-faced and lacking his iconic mustache (aside from a beard his character grows midway through the story, which I suspect was a face merkin).

How powerful is the imagery of Elliott's upper lip hairs? Do a search for photos related to this movie and you'll find that the film has been reissued on video a number of times with DVD covers and posters that depict an older, bountifully mustachioed Elliott. One of them is so recent, the actor must've been at least 60 at the time.

John Lawler is actually referred to as "just a boy" by the main character, Molly, a forlorn sheriff's wife edging up against motherless middle age played by Vera Miles. The setup is that he's captured after robbing a bank, killing several men in the process, and her husband, Marvin Parker (John Anderson), puts him in his jail until the judge can arrive to authorize the stringing up.

Molly, like a lot of sheriff's wives in the movies, has an unofficial capacity as cleaner of the jail and feeder of the prisoners. She loiters in these errands, clearly intrigued by the rangy cowpoke making eyes at her, and they steal a few quick conversations.

She then arranges to send off the tired deputy on guard duty so they can have a few hours alone together, and John sweet-talks her mercilessly, saying she favors his mother with her long brown hair, and he regrets that he'll swing from a rope without getting to see her have the child she so desperately wants -- and that he could help her have, unlike that crusty old sheriff.

She doesn't take much convincing to bust him out, and off they ride together, dodging posses and having adventures. It's soon quite clear that John's affections for her extended only so far as her ability to get him out of certain death. He even tells her so, quite explicitly, that he lied to her to save her neck.

Yet Molly retains a grim, doomed hope that the bandit will turn out to be the man of her dreams she thought the sheriff would be. He even ditches her on several occasions, only to return. In one sequence he leaves her stranded alone in the desert, and when his horses appears over the dune a few days later, the gullible, parched woman even smiles at him.

Just as our pity for Molly has started to curdle toward distaste, she starts to show some backbone. When an American Indian squaw with a newborn babe stumbles upon them and promptly dies, Molly latches onto the infant with ferocious, if passive determination. It's immediately evident that she views this as her last, best opportunity for motherhood.

She names him "Little John" and makes it clear she wants big John to act like a father to him. He seems ready to put the boy on a spit and roast him, though he does (albeit briefly) show him some tenderness, when Molly has to go into town to pick up supplies and run an errand on his behalf.

It turns out this chore is the breaking point. Molly is to seek out Dolly (Cynthia Myers), a whore that he traffics with whenever he passes her way. In Dolly Molly sees the same neediness and dependence that has come to define her own interaction with him. John actually makes Molly and the baby sit on the stoop outside their hideout shack while and he and Dolly have extended, celebratory sex.

The next time John's fickle moods bend southward, Molly has finally toughened up enough to take a genuine stand in the sand. "I loved you..." are her parting -- and for him, final -- words.

This was the first feature film for director Gary Nelson, a television veteran who would go on to helm some notable pictures including "Freaky Friday" and "The Black Hole." The version I saw (via Amazon streaming) had apparently been cropped on the sides to play on TV, resulting in a nearly square image that I'm sure left off some important panoramic vistas. "Molly" has a spare, cinema verite sort of beauty.

The screenplay, the only one by erstwhile actor Terry Kingsley-Smith, has a great premise but doesn't really flesh out the characters enough. John in particular remains largely an enigma, his actions swinging this way and that along with his regard for Molly. He's a user, only caring for people as far as they can do for him. But Elliott's face shows several flashes where it seems like he's tempted by her stubborn goodness -- particularly the way she always seems to have faith in his ability to change, despite all evidence to the contrary.

I'm not sure if they're intentional, but there are some tinges of proto-feminist themes in this movie. Molly remains the clear central character throughout, and John is the external force that plows into her life and shakes things up. Starting out as a passive wallflower who wants only to be a mommy, by the end she's a seasoned veteran of the open range, her hair shorn, her face sun-blasted and her demeanor abrupt and commanding.

Miles had a long and distinguished career, doubtlessly best known for playing the snooping sister in "Psycho" -- a role she reprised in the regrettable sequel nearly a quarter-century later.

She was hardly a stranger to Westerns, playing a key role in "The Searchers." After this film she made two other family-themed Westerns in quick succession, "One Little Indian" and pairing with James Garner in "The Castaway Cowboy." She largely returned to her roots in TV after that, remaining active into the 1990s. (And, at nearly 90, she's still with us.)

"Molly and Lawless John" isn't a great movie or even a particularly good one, but it's an interesting time capsule of how the most venerable of film genres was aging after the apex of the counter-culture. It may not be acid, but it's a strange trip.