Review: "The Nutcracker and the Four Realms" 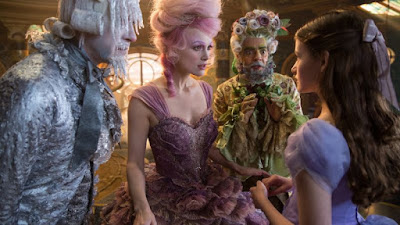 The Nutcracker is a timeless tale interrupted by a whole lot of unfortunate dancing. Purists may be offended by the radical rejiggering Disney has given the story in “The Nutcracker and the Four Realms,” but I found it to be a colorful, amusing cinematic fairy tale that will entertain young and old.

For the record: there is still some ballet, but it’s mercifully limited to just a couple of key scenes, plus some more modern dance variations over the closing credits.

This version bears only a passing resemblance to either the original short story by E. T. A. Hoffmann or the Nutcracker Ballet scored by Tchaikovsky. There’s still a magical realm with a mouse king, toy soldiers who come to life and a brave nutcracker captain. Beyond that, it’s essentially a new creation that uses the Nutcracker story as a mere jumping off point.

Mackenzie Foy plays Clara, daughter of a well-to-do family in 1890s London. Her mother has just died, and her father (Matthew Macfadyen) is shell-shocked and rigid. His wife left each of the three children a Christmas gift, and Clara’s is a beautiful silver egg. Unfortunately, it’s locked and there’s no key.

In this retelling, London is wonderfully multicultural and Clara is a brainy science girl instead of a silly thing obsessed with dresses and boys. She seeks out the help of her kindly godfather (Morgan Freeman), an inventor who raised her mother, who herself became a great scientist. This leads to the kingdom of the four realms, a place of magic and wondrous color.

Clara’s mother created this place when she was a little girl, and became its queen. With her absence the kingdom has fallen into disarray. The realms of flowers, ice and fairies are at war with the fourth realm, which used to have a name of its own but has gotten the Voldemort treatment since things went south.

Clara wanders into the forbidden fourth realm, a place of creepy overgrown forests and hooting owls, and finds the key only to have it stolen by a nasty little mouse. She enlists the aid of the Nutcracker Captain (Jayden Fowora-Knight), a fetching lad who appears to be wearing more makeup than Clara, or anyone else in the movie.

Mother Ginger (Helen Mirren) runs the fourth realm, and has a face that’s literally cracked by time or some other more nefarious cause. Eugenio Derbez plays the flower realm leader, Richard E. Grant is the frozen one, and Keira Knightley is the Sugar Plum Fairy. I wasn’t actually sure it was Knightley until well into the movie; her normally resonant voice is pitched up into a cutesy screech and her face heavily slathered with paint (though still not as much as the Nutcracker).

Directed by Lasse Hallström and Joe Johnston from a script by Ashleigh Powell and Tom McCarthy, “The Nutcracker and the Four Realms” is pitched very much in the fairy tale mold, with broad characters and knowing looks exchanged. The outcome is never really in doubt, but there are some good twists and amusing bits along the way.

The army of tin soldiers raised to fight Mother Ginger is clanking and scary. I should note my 8-year-old was skeptical going in but enjoyed the movie thoroughly, while my 5-year-old found some sequences a bit too intense.

This film is like an enchanting bauble you hang on a Christmas tree. It’s nice to look at and makes you smile, though it’s more for what it reminds you of than anything it actually does.