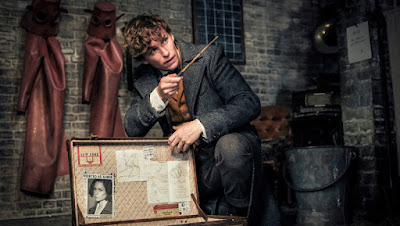 What an utterly imcomprehensible movie.

J.K. Rowling's "Harry Potter" spinoff, "Fantastic Beasts and Where to Find Them," was a lackluster effort that showed that successful novelists don't always make for good screenwriters. It featured a drab, uninteresting protagonist, a retread of the Harry/Voldemort dynamic of good/handsome young wizard versus the evil/ugly old wizard, and a lot of hard-to-follow CGI. Even though it only came out two years ago, I barely have any solid memory of it.

The not-needed sequel, "Fantastic Beasts: The Crimes of Grindelwald," is so nonsensical that I spent the entire 2¼-hour run time just trying to figure out who was who and what was what. I still didn't have it all properly sorted by the end.

You may recall that the end of the first film, magical zoologist Newt Scamander (Eddie Redmayne, still stooping and mumbling his dialogue) had battled a member of the Ministry of Magic, which acts as the law enforcement for the parallel world of wizards and witches, who was revealed to be the nefarious Grindelwald. Like Voldemort, he believes that magic-users are destined to rule the world over the non-magical Muggles, especially those of pure blood.

He quickly escapes his confinement in a daring mid-air battle, and sets about leading his revolt. Professor Dumbledore (Jude Law), the most powerful wizard in the land, refuses to take on Grindelwald himself, and begs Newt to do so instead.

"You do not seek power or popularity," Dumbledore tells Newt as the pretext of why he should do battle in his place. Flashbacks, however, reveal a friendship of a... special nature from when he and and Grindelwald were young.

(Rowling still keep insisting, in a cheap bit of post-publication revision, that Dumbledore is gay, though as a screenwriter she hasn't yet seen fit to make it explicit.)

This sets off another round of international magic-hopping, face-offs, Newt being chased by the ministry "aurors," including his own brother, and the introduction of some new critters from Newt's briefcase menagerie, including one that looks like one of those Chinese parade dragons brought to life.

Several side characters return, without good purpose. There's Newt's Muggle friend, Jacob (Dan Fogler), and his witch lady love, Queenie (Alison Sudol). Credence (Ezra Miller), a disturbed wizard everyone refers to as "a boy" even though Miller looks to be pushing 30, acts as the Macguffin everyone is chasing after because he's the key to something.

(Things are always keys to something in the Harry Potter universe.)

Katherine Waterston returns as Tina, an auror who arrested Newt in the last movie and then fell in love with him, although no one actually says so because everyone's British. This movie literally has no idea what to do with her, so she's shunted off to the sides of the action and we largely forget about her. We're to believe that she's an expert investigator, but took at face value an erroneous wizard newspaper article claiming Newt was engaged to Leta Lestrange (Zoe Kravitz) rather than Newt's brother, Theseus (Callum Turner), thus hurting her feelings.

Johnny Depp is pretty much the only interesting thing in the movie, needling and coaxing like a mythical serpent, essentially colorless with a shock of platinum hair, death's-head pallor and mismatched eyes. As written he's merely a more charismatic version of Voldemort, but still, whenever he's onscreen you can't take your eyes off him.

The opposite can be said for Newt, who's just as bloodless and boring as the last time around. It often happens that the protagonist of a story, especially one with a fantastical backdrop, is made to be less interesting than the whiz-bang supporting characters and villains, acting as a familiar anchor for the audience to relate to.

But Redmayne's Newt is just a drip. The fact that he's caught in a raging storm of impossible-to-follow subplots and eye candy makes it understandable that he's swallowed by his own story.

Posted by Christopher Lloyd at 9:29 AM