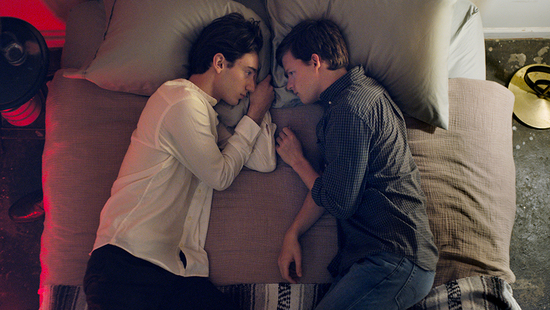 “Boy Erased” is a little too self-important for its own good, but it boasts emotive performances and a generally sensitive look at how some people struggle to reconcile their religious tenets with the reality of people who believe they were born gay. It’s essentially one belief system vying against another.

This is the second drama in the last few months about the controversial practice of “gay conversion therapy,” in which people attend intensive retreats administered by church groups to “cure” their same sex attraction through a mix of Bible teachings, pseudo-science therapy and even alleged psychological and physical abuse. Some minors have reported being held against their will, and there are instances of them committing suicide as a result of the practice.

It’s outlawed in 14 states and, as the end titles make explicit, the filmmakers would really like their movie to be a vehicle for banning it in the other 36.

I was put off by this sort of brazen electioneering, especially since the movie I had just seen took pains not to depict all people of faith as bizarre loons.

Writer/director Joel Edgerton adapted the story from the book by Garrard Conley, chronicling his own two weeks in the Love in Action conversion program as a teenager in 2004. Lucas Hedges, a surprise Oscar nominee a couple of years ago, cements his acting chops playing Jared Eamons, an All-American kid from Arkansas who struggles with his burgeoning homosexuality.

Nicole Kidman and Russell Crowe play the parents, Baptists who wear crosses and try to live by the literal word of the Bible. They seem to have a good life. They’re a close-knit trio, prospering under dad’s Ford dealership. He also preaches in their church. Mom wears a blonde bouffant and a perpetual smile, plays the role of dutiful wife and mother but clearly has a strong sense of self.

When they get a call from someone at Jared’s college outing him, his parents threaten to throw him out of their house and their lives unless he agrees to the therapy recommended by their pastor. It seems OK at first, a 9-to-5 set of workshops in which there’s lots of support and loving the sinner while hating the sin. The other attendees seem just as lost as Jared, but determined to “lean into” the therapy.

But cracks soon start to show. There is crying and browbeating glimpsed on the fringes. Jared’s personal items are confiscated each day, and pages of his journal torn out to be inspected for troublesome thoughts. Jared is especially jarred to learn the month-log program is just an assessment period; some people move in and stay for a year or more.

Edgerton himself plays Victor Sykes, the man running the program. He’s not an out-and-out villain, more a guy in over his head who thinks he’s a great coach but is steadily running the team into the ground. He has a system for breaking down gay kids in order to build them back up again, but he only seems to have thought out the breakdown part.

Truly terrifying is Brandon, a tattooed ex-con played by bassist Flea. He’s the “scared straight” portion of the program, though Brandon is clear in expressing that his problems did not extend to same sex attraction. His main job is to literally teach the male attendees to act manly, e.g. not crossing your legs and having a firm handshake. Triangles are the strongest shape, he instructs.

“Boy Erased” is best when it focuses on Jared’s increasingly extreme experiences at the therapy program and his fragile relationship with his parents, especially his dad. Flashbacks to his early gay encounters are fitted in rather awkwardly.

The movie also doesn’t make much of an attempt to illuminate the interior lives of Jared’s fellow attendees. He and Jon (a darkly charismatic Xavier Dolan) keep starting conversations that never really go anywhere. I kept expecting them to initiate a secret friendship or even a relationship, but the movie misplaces this dynamic.

It’s still a worthwhile film, one that doesn’t treat either gay kids or Christians as cartoon figures, all bright lines and easy answers.