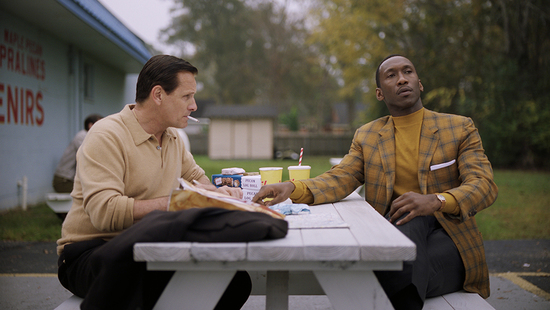 Tony Vallelonga, aka Tony Lip, stumbles out of bed to find his Bronx apartment filled with friends and relatives -- all men. It’s been another hard night working at the Copacabana, another face split open by his fists. It’s what he does. His people are there because a couple of plumbers are working in the kitchen while he was sleeping, and they are black.

How could you leave my sister alone with those “eggplants,” demands his brother-in-law (Sebastian Maniscalco). His father refers to the men (in Italian) as “sacks of coal.” After Tony spies his wife (Linda Cardellini) giving the plumbers lemonade, he quietly slips the offending glasses into the trash.

This is the opening for “Green Book,” one of the finest films of 2018. It’s about two very different men who forge an unexpected bond while traveling in the Deep South in 1962. It’s a historical tale that has an urgent relevancy to our very divided times.

Few films move me to real tears; this one did, and not just once.

The Copa is closing down for a couple months for renovations, and Tony needs a paycheck. The slicked-back-hair types can always find work for him; Tony has a talent for the rough stuff but doesn’t relish it. Another prospect presents itself: chauffeur a doctor around for eight weeks.

It turns out this is Dr. Don Shirley, a famous pianist (and owner of several doctorates) who is about to embark on a private concert tour in the Midwest and South. He is everything Tony is not: black, educated, literate, well-dressed, finely mannered, aloof. Shirley is put off by Tony’s Guido manners, but knows that when the tour turns left into lands of overt segregation, he will need not just a driver but a bodyguard.

The physical divide between the lead actors is striking. As Shirley, Mahershali Ali seems to have grown taller and leaner from when he won an Oscar for “Moonlight.” His Don Shirley is a man of very refined tastes. He plays only Steinway grand pianos and drinks nothing but Cutty Sark. Riding in the back of a brand-new turquoise Cadillac Sedan De Ville, he places a fine cloth over his legs, as if creating a barrier from the ordinary.

Vigo Mortensen’s Tony Lip has simple but voracious appetites. He is seemingly perpetually eating, stuffing his hole with sandwiches, steaks, burgers, whatever he can get. I’d guess Mortensen packed 40 pounds on for this role. Affecting a stumblebum patois, he seeds his speech liberally with “deese and dose,” along with plenty of epithets.

They cruise around the country, sharing extended conversations that gradually move from boss/worker to adversaries to something like an alliance. Tony isn’t hateful, but grew up with racism seeped into his skin. Shirley is a more complex character, proud of his blackness but aware of his estrangement from regular folks with his skin color.

Shirley sits atop a throne of his own making, but as he tells Tony, a high castle can be a lonely place.

Food and music are the fuel that drives their journey. Tony is astounded to learn that Shirley has never tasted fried chicken, and promptly pulls over in Kentucky for a bucketful. He’s also amazed that Shirley is unaware of celebrated black pop singers of the day like Aretha Franklin, Chubby Checkers or Little Richard. In a fit of hyperbole, Tony declares himself more authentically black than his passenger.

Shirley’s band, the Don Shirley Trio, plays intricate jazz with a deep overlay of classical music that belies his training. He’d prefer to play Chopin, but the record label doesn’t think that would sell. Shirley goes along, both for the sake of his own ambitions and for ulterior motives, which prompted this tour of swanky rich folk’s homes and country clubs.

As they turn south, their fortunes follow. There are expected run-ins with police and rednecks, but also the subtler kind where well-heeled types invite Shirley into their mansions but won’t let him use the bathroom. He’s a man of massive resolve and dignity, but there are limits.

At first Tony helps Shirley because it’s his job; he will not receive the back end of his contract if they miss any performance dates. But later, he stops seeing Shirley as an “other” but one of his own, to be backed up and stuck to.

People will no doubt be surprised to learn “Green Book” is directed by Peter Farrelly, best known for the “Dumb and Dumber” flicks. He co-wrote the script with Brian Hayes Currie and Nick Vallelonga, Tony’s son. The title comes from real publications of the day that instructed black travelers on safe places in the South where they could eat or sleep.

I kept waiting for the film to stumble or a strike a false note, but it never does. As the men face adversity together, their natural enmity falls away. It’s a simple tale, personal yet timeless. With so much in the world beating us down every day, I savored being uplifted.