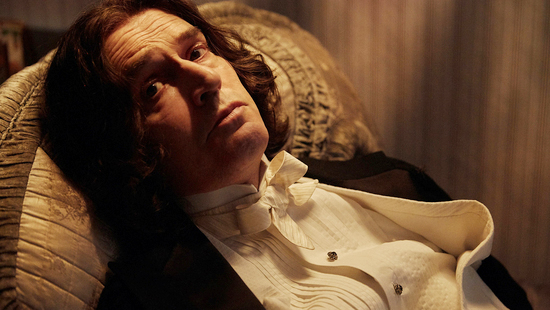 I sometimes imagine what Oscar Wilde would be like if he lived in our age. My guess is he would be the king of Twitter, dicing up issues of the day in devastating short poems, or host of a late-night talk show where he would bring on guests of a more intellectual bent than Stephen and the Jimmys, exchanging bon mots and some light flirting over martinis.

In the 1890s Wilde was the leading literary figure in England, dashing off popular plays, books and verse at a staggering pace. He was also a major star of what we would now call pop culture, a must-have on the upper crust social circuit.

That all came crashing down when was convicted of a crime for his more-or-less open homosexuality in 1895, especially an ongoing affair with the son of the Marquess of Queensberry. He served two years of hard labor in prison, and endured a penurious existence without the benefit of fortune or fame until his death in 1900 at age 46.

It’s this period that “The Happy Prince” chronicles. It is written, directed and stars Rupert Everett, who I did not recognize throughout the course of the movie. It’s a devilishly charming and deeply tragic performance, a look at a genius laid low for the crime of being who he was.

Self-pitying, manipulative and self-centered, it’s a portrait of Wilde that tries to show both his enormous talents and evident flaws.

He shambles about Paris and Italy, living off the generosity of his few remaining friends, such as agent Robbie Ross (Edwin Thomas) and actor Reggie Turner (Colin Firth), a meager allowance from his estranged wife, Constance (Emily Watson) and whatever he can beg or grift.

The story moves backward and forward in time, with glimpses of a vibrant Oscar at his prime, standing on stages before rapt audiences. We also see him immediately after getting out of prison, when he thought he was at his lowest, and also when he falls even lower. He does little writing, spending his time and meager funds on absinthe, cocaine and dallying with pretty boys.

Things grow tense when his former lover, Alfred “Bosie” Douglas (Colin Morgan) turns up and they rekindle their relationship. Oscar knows that he lost literally everything he cared about to Bosie’s family, but he can’t resist his pull. For his part, Bosie is a spoiled rich boy who enjoys being the most important person in the world to a great man.

The title comes from one of Wilde’s tales, which he used to tell to his young boys as a sad bedtime story. He writes letters to Constance begging her to take him back, though we suspect this has more to do with wanting to be in money again.

His affection for his estranged sons seems genuine, though, and he semi-adopts a pair of street urchin brothers as stand-ins. Ever a prisoner to his vices, though, he occasionally has sex with the teenage one.

The dialogue is beautiful and intricate, bits of actual Wilde writings intermixed with words that sound like something he would say. Everett issues much of this in a gravelly purr that is both evocative and often hard to understand.

“The Happy Prince” is the tale of the deeply unhappy last days of Oscar Wilde. He was a victim of his times, but also of his own avarice for pleasure and self-idolatry. One of our greatest talents was treated cruelly, especially by himself.