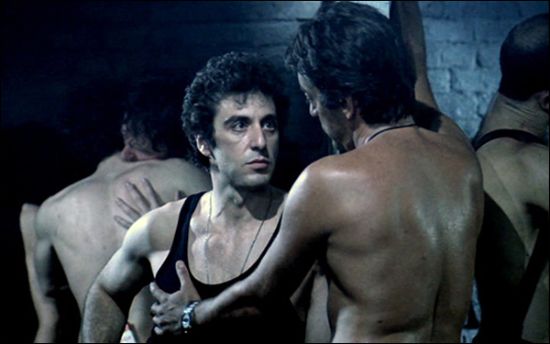 
"Cruising" has the distinction of being the first mainstream movie to garner a major protest from the gay community.

Just a decade after Stonewall, the gay rights movement had gotten organized enough to stage street protests to try to disrupt the production in New York City. They blew whistles during the outdoor shots, forcing director William Friedkin to redub the  movie post-production, and even used reflectors from atop high rises to screw up their lighting.

It got more protests when it finally came out, though not enough -- or perhaps just the right amount -- to make it a moderate hit. Critics were fairly unimpressed, and today the film is pretty well forgotten except for the controversy.

Looking back with the perspective of 40 years, "Cruising" still isn't a very good movie but it's not a terrible one, either. Nor is it the lurid, gay-bashing piece of pulp it was labeled at the time.

Instead, it stands now as an observational piece that turns its eye on a particular place and time. In this case, it's the "leather" scene of the  1970s to early '80s typified by a fetish for leather jackets, pants, hats and other paraphernalia. Gay men would gather in  exclusionary bars to dance, flirt, have sex, do drugs, etc.

Gay hangouts had been underground for decades, and now they were becoming more public as the community founds its identity. It no doubt horrified "the straights," but that was an essential part of the movement up until fairly recently.

Interestingly,  the NYC gay club were largely operated by the Mafia, which is one reason they were relatively protected and allowed to thrive. Thanks, Guido!

Friedkin wanted Richard Gere for the lead because he had an androgynous prettiness to him, but settled for Al Pacino. There is obviously a lot of similarity to Pacino's breakout role in "Serpico," where he also played a cop going "deep undercover" into a world that was alien and frightening to him.

He plays Steve Burns, a street cop in his late 20s who is eager to get his "gold shield," aka make detective. (Pacino was actually 40.)

Captain Edelson (Paul Sorvino, made up to look haggard and prematurely old), who has been assigned to solve a string of gruesome murders of gay man, many of them discovered in dismembered pieces, taps Burns because he resembles the physical type favored by the killer: small stature, slim, dark hair and eyes. The idea is to use Burns as bait to draw the slasher out.

(Never commented upon is that the majority of men Burns encounters in the leather bars look just like him.)

Until now these killings have been swept under the rug, filed as CUPPI (Circumstances Undetermined Pending Police Investigation) with the body parts literally shoved in a coroner's drawer and forgotten. But they've started to get some press and gay activists, gifted with power for the first time, are pressuring city politicians for action.

So the movie gives a nod to the gay community that was trying to prevent it from being shot. The main criticism was the suggestion of an inherent connection between violence and homosexuality. Friedkin et all dismissed that, saying they were only telling a story about one small slice of gay men.

Later he came to acknowledge the film wasn't representative of a burgeoning movement.

The film follows Burns as he gradually immerses himself into the leather scene. "Cruising" was initially given an X rating by the MPAA rating because of the depiction of sex between men in the bars. (One wonders if identical scenes with heterogeneous couples would have been similarly labeled.) A bunch of the footage was cut out to make the grade.

I wonder what the experience was like for contemporary audiences, which had just learned to accept pornographic films as part of the mainstream, and now were shown obvious, if not overt, gay sex.

The film doesn't just treat these men as objects, though. We meet Ted (Don Scardino), a struggling playwright living next door in the apartment Burns takes up as part of his cover. He's a spectacularly normal guy, worrying about money and his career, as well as conflicts with his roommate, a controlling dancer named Gregory (James Remar) we meet late in the movie.

We get introduced into this world, which like any other segment of human society has its own particular sets of rules and expectations. Burns notices men with colored bandannas hanging out of their pockets and asks a store vendor (Powers Booth) what they mean, learning they're signals for sex acts desired to be performed or received.

Later, when Burns wears one in a club and is approached, the other man becomes enraged when Burns says he only likes to watch. On another night he is gobsmacked when he returns to the same place and finds everyone is dressed as police officers, one of the regular "theme nights." He's asked to leave because, ironically, the one actual cop in the place isn't dressed as one.

A key failing in the story is how Burns is supposed to pass himself off as gay if he never engages in any sex acts with other man. It's like the classic trope among drug dealers suspicious of undercover LEOs, "Take a hit to prove you're not a cop."

I would think that he would quickly gain a reputation as a suspicious interloper, a curious dilettante or a cockteaser.

The movie was based on a 1970 novel by Gerald Walker, a New York Times crimes reporter who fashioned his story out of bits 'n' pieces of actual murders from his beat. My understanding is Friedkin, who also wrote the screenplay, inserted the leather scene  based on magazine articles and his own research, including frequenting some bars himself.

So it's very much a straight perspective exploring the gay scene like a zoological expedition, which no doubt played a part in resentment toward the movie. There was a budding gay cinema back then, including the films of Andy Warhol, though these didn't penetrate mainstream Hollywood.

Friedkin has said that he very much saw the project as another one of his gritty  investigative dramas, like "The French Connection," but set against a different backdrop. Indeed, once you take away the (lite) S&M and boys macking on each other, it's pretty much a straight police procedural.

The story occasionally returns to Burns' relationship with his girlfriend, played by Karen Allen, and how he grasps at her as a touchstone to his "normal," straight life that he yearns to return to. However, there is some suggestion that Burns is genuinely piqued by his exposure to homosexuality. He puts on eye makeup and pumps iron while staring in the mirror.

This would be a more interesting area to explore that the film dallies with and then drops.

The most compelling part about "Cruising" is the ambiguous way it treats its murderer. The story ends with the case officially solved, with a gay grad student (Richard Cox) who took a class from a professor who was killed charged as "the guy." However, Ted later turns up dead and the cops blame it on a lovers' quarrel so as not to spoil their case.

What's really interesting is that Friedkin uses three different actors who swap in and out playing the killer or the victims. He's seen as a tall guy in leather cap and sunglasses who likes to do a little playful singsong routine with his victims right before he stabs them with an outsized steak knife.

So the first man killed, a muscular young actor, later plays the killer himself. Cox plays the killer in another murder in Central Park, but appears to be innocent when Burns later lures him into the park and they try to stab each other.

At one point a waiter named Skip (Jay Avocone) is fingered because he works at a steakhouse that uses similar knives and because he has a reputation for liking the rough stuff. Burns initiates a tryst that cops burst in on, arresting them both.

During the interrogation Skip is beaten to a pulp by the police before being released on no evidence. Burns complains this isn't what he signed up for, and nearly quits.

He's also not happy about, for the purpose of continuing the ruse, getting smacked around himself by a huge black cop wearing only a hat and jock strap, in what is surely the film's most completely unhinged moment. This officer is never named and speaks no dialogue, and his outfit is never explained.

There's other portions that show some dirty cops harassing the cross-dressing hustlers, arresting them without cause and forcing them to perform sex acts on them. My guess is the interrogation room cop was trying to instill that same fear.

"Cruising" had its heart in the right place, despite accusations, but its head in the wrong one.