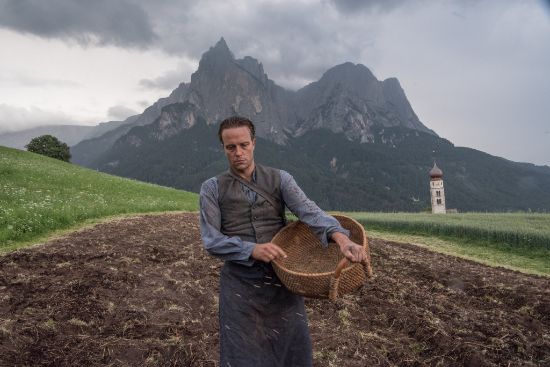 Just a quick mini-review today. I saw "A Hidden Life" a few weeks back in the run-up to awards season, and it kind of got lost in the writing shuffle.

I've admittedly been very tepid to Terrence Malick. I haven't unreservedly loved a movie of his since his first, "Badlands," and that was nearly 50 years ago. I recognize the singularity of his artistic vision while wishing desperately he would take someone's advice and not keep making films that are so long and languid, often tortuously so.

"A Hidden Life" is probably his finest and most engaging film since "The Thin Red Line." There's a great movie inside a much longer one that's merely good. It would be better at just under two hours instead of just under three, but at this point the auteur's aesthetic is written in stone.

It's the true story of Franz Jägerstätter (August Diehl), a conscientious objector to the Nazi regime during World War II. An Austrian farmer of deep religious convictions, he refused to swear fealty to Adolf Hitler, was imprisoned and eventually executed. Thought the movie doesn't mention it, he was later declared a martyr and beautified by the Catholic Church -- one step below sainthood.

Valerie Pachner plays his wife, Franziska; Michael Nyqvist is a helpful local bishop; Bruno Ganz is a sympathetic judge; Matthias Schoenaerts is the reluctant lawyer assigned to defend him.

It's an unspeakably gorgeous film, cinematography by Jörg Widmer and musical score by James Newton Howard. Both should receive Academy Award nominations. Malick's MO is to juxtapose the natural world around his characters so we never forget they are part of a greater organic existence.

The Austrian mountains loom over everything we see, drawing our gasps but also lulling us into a false sense of security. These mighty stone walls can't keep out the seep of human depravity.

It's one of Malick's most traditional narrative structures, even if it's a slow-paced one. His screenplay gives equal weight to Franz' family struggling back home while he languishes in prison, unwilling to compromise his principles. We admire him but also pity his obstinance.

I seethed with rage as fellow villagers ostracize Franziska and even assault her. I can think of no better recent portrayal of the corrupting power of the mob.

"A Hidden Life" won't be for everyone, something you can say about the rest of Malick's oeuvre. I'd guess less than 10 percent of filmgoers can stomach this sort of thing. But for those who possess patience and an openness to a genuine spiritual journey, it's a worthy trek.