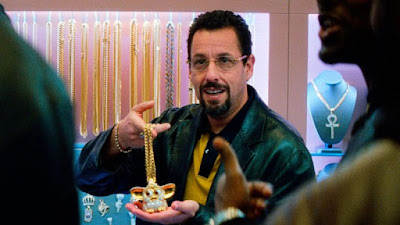 “Uncut Gems” is a 135-minute exercise in anxiety and unpleasantness. It begins with a colonoscopy, and things go downhill from there.

Adam Sandler, the doofus funnyman who makes unambitious comedies for kids and adolescents and occasionally tackles serious roles in films like “Punch Drunk Love,” kvetches and whines and shouts and connives as Harold Ratner, a Manhattan gem dealer. He’s a jerk, a coward, a philanderer, a compulsive gambler, inept businessman, a lousy husband and father and not even a particularly good boyfriend.

It’s fine to have an unlikable person as your main character in movie. But he’s got to go somewhere. He needs to start low and go high or high to low or even just side to side. Howard starts out as a putz driven by his compulsions and ends the movie the exact same way.

“Gems” is directed and written (along with Ronald Bronstein) by brothers Benny Safdie and Josh Safdie. A couple of years ago they made “Good Time,” beloved by many but not me. It felt like one long pointless chase, and this new film bears a striking resemblance.

Harold, who wears rectangular glasses that give him a sinister beetle look, is seemingly successful but is always teetering on the edge of total chaos. He owns his own jewelry shop, the kind where you have to be buzzed in through a bulletproof glass chamber. He has a big house on Long Island, a Mercedes, a nice apartment in the city, and his wife (Idina Menzel) and two sons want for nothing.

But Harold owes money all over town -- for gambling debts, for pawned watches or rings, and so on. He has debts on his debts. He’ll use the money from one loan to pay off another, and the wise guys are constantly threatening to break off a piece of him.

Julia Fox plays Julia, who works in Harold’s store and is also his mistress. He’s her sugar daddy, paying for a swank apartment and supporting her partying, while simultaneously complaining she only shows up at work when she wants to. Julia also appears to be running some kind of operation of her own on the side, which involves cozying up to an up-and-coming R&B crooner, The Weeknd (playing himself).

Julia is one of those female characters who only exist in the movies. She’s young and gorgeous and crafty, and why she hangs around with an unstable loser like Harold is never even hinted at. They undergo a seemingly regular cycle of fights, breakups and reconciliations.

The main storyline centers around a black opal Harold spent months obtaining on the sly from an Ethiopian mine. It’s basically a hunk of rock with a number of rainbow-colored gems embedded. He claims it’s worth more than a million bucks, and selling it will solve all his problems.

It won’t. Harold is not the sort of guy whom problems seem to find; he actively goes in search of them.

One day Kevin Garnett walks into his shop. To show off, Harold dazzles the NBA star with the opal. But Demany (Lakeith Stanfield), the young black operator he hires to bring African-American celebrities and players into the store, convinces Harold to let Garnett borrow it for a day. (The story is set in 2012, when Garnett was still playing out the downside of his career.)

He has a monster game that night, and becomes convinced the opal is a good luck charm. There follows a cat-and-mouse game of Demany disappearing and Harold being unable to get the opal back. Meanwhile, he’s hocked stuff that doesn’t belong to him in order to place more bets on basketball games.

Circling around the edge of the story is Arnold (Eric Bogosian), one of the people Harold owes, who’s closer than most. Judd Hirsch plays Harold’s dad, unaware of how deep his son’s pathologies go. Keith Williams Richards is scary as hell as an icy-eyed goon stalking Harold.

“Uncut Gems” has boundless energy but no direction. Sandler is talking, talking, constantly talking, until it becomes a drone we wish would cease. You can hate your protagonist, but you’d better not be annoyed having him around.

Watching this movie is like winding up a kid’s toy that spins wildly in place, throwing off all sorts of crazy lights and sounds and colors. None of it really makes any sense, and then it stops.