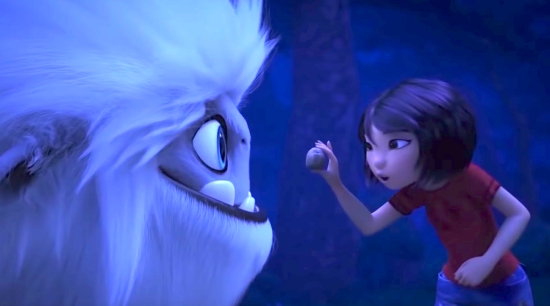 “Abominable” won’t earn a lot of points for originality, especially in a year that already saw two other bigfoot-based animated films: “Smallfoot” and “Missing Link.” But it turns out to be the best of the bunch.

Yi (voice of Chloe Bennet) is a Chinese teenager who dreams of leaving behind her staid life and family, mourning the loss of her father long ago. But then she encounters a yeti who had been kidnapped from his mountain homeland and dropped into the city.

Dubbing him Everest, Yi resolves to return him to where he belongs. Tagging along are Peng (Albert Tsai), an annoying neighbor kid, and Jin (Tenzing Norgay Trainor), a metrosexual playboy who was a childhood friend but these days is more interested in clothes and party girls.

Eddie Izzard does the voice of the villain, Mr. Burnish, a selfish tycoon who wants the yeti to show what a great explorer he is. His henchwoman is Zara (Sarah Paulson), a nicer scientist type.

There’s lots of music and magic in “Abominable,” with writer/director Jill Culton ably setting the pace. Everest is revealed to have innate abilities that start out wondrous and later become truly astounding.

“Abominable” wasn’t a huge hit at the box office, but for my money it’s better than “Toy Story 4” or “Frozen 2.”

Sometimes it pays to be last.

Bonus features are voluminous. They include a short film, “Marooned,” about a selfish robot; five deleted scenes; feature-length commentary track by the filmmakers and animators; and another Everest short, “Show and Tell.”

There are also several featurettes: “Making a Myth (Movie,” “Animating Abominable;” “Meet the Cast;” “Your Yeti Care Guide,” “Courage to Dream,” “An Abominable Tour with Chloe Bennet;” “Everest’s Talk Box;” “How to Speak Yeti-ese;” and “Cooking with Nai Nai.”

Also very neat is an animation drawing tutorial for kids, “How to Abominable.”