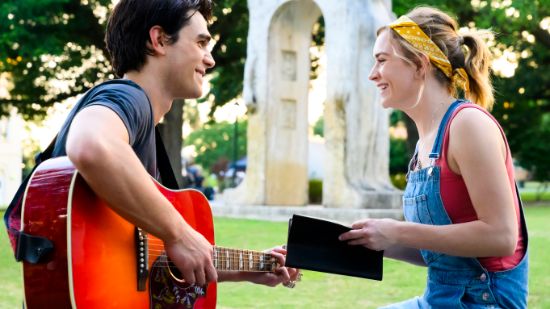 “I Still Believe” is a good old-fashioned three-hanky romantic tearjerker. Boy meets girl, girl runs from boy, boy chases and catches, girl gets sick, and the tears start flowing. It’s been a familiar formula with minor variations since “Love Story” 50 years ago.

You could actually enjoy this picture beginning to end without realizing it’s part of the faith-based film pipeline. There’s no overt proselytizing and it has recognizable actors like Britt Robertson, K.J. Apa, Shania Twain and Gary Sinise.

If this biographic of musician Jeremy Camp weren’t set at a Christian college and feature songs with lyrics about faith and forgiveness, it would be pretty indistinguishable from any other flick at your local cinema.

I say that not as praise or disapproval, but simply observing how you can measure the success of outlier movements by when they join the mainstream.

I can’t say as I’m a big fan of Christian pop music or Camp’s songs in particular. To my ears there’s a generic sameness to them, starting with plaintive, plucked guitar strings and inevitably building to soaring crescendos for pronouncements of faith and glory. It’s a white-people aural pudding.

(Speaking of, good luck finding many POC in the movie.)

Apa plays Jeremy, an impressionable kid from Lafayette, Ind., who moves out to California to attend bible college circa 1999. There he meets Melissa (Robertson), who seems a little older and wiser, and immediately is struck by the strong pull they have. Jeremy has a gift as a singer/songwriter, and dreams of following in the footsteps of Jean-Luc (Nathan Parsons), an alumnus who broke out big.

Apa brings a lovable decency to the role. With his dark, lanky good looks and breezy charisma, his Jeremy sort of reminds me of Jim Halpert from “The Office,” minus the snark. Jeremy’s parents (Sinise and Twain) are struggling financially and have a younger special needs son, but there’s love and support all around.

I really like Robertson as a performer. She hasn’t broken through in any big movies, with “Tomorrowland” and “The Space Between Us” both missing and starring roles in several short-lived TV/streaming shows. There’s a probing intelligence behind her eyes, and she takes what could have been a very reactive role and really becomes the engine that drives this movie’s emotional momentum.

We see her fear at falling for someone so quickly – especially, as we soon learn, because Jean-Luc has feelings for her. Melissa asks Jeremy to keep their (chaste, of course) romance a secret.

But then she falls ill with stomach cancer, just as Jeremy’s music career is taking off. He sings to the audience of his love for God and his fiancé, and begs their prayers to heal her. For a while it seems like a miracle is in the offing.

No, this isn’t a particularly subtle or sophisticated movie. But it’s a well-told one, by directing team the Erwin Brothers, Jon and Andrew, with Jon also supplying the screenplay with Jon Gunn. They’re all veterans of the Christian film school and seem to know its rhythms well.

Young love is powerful, transformational… and sometimes tragic. “I Still Believe” gives us the highs and the lows, and what comes after.

Posted by Christopher Lloyd at 7:00 PM