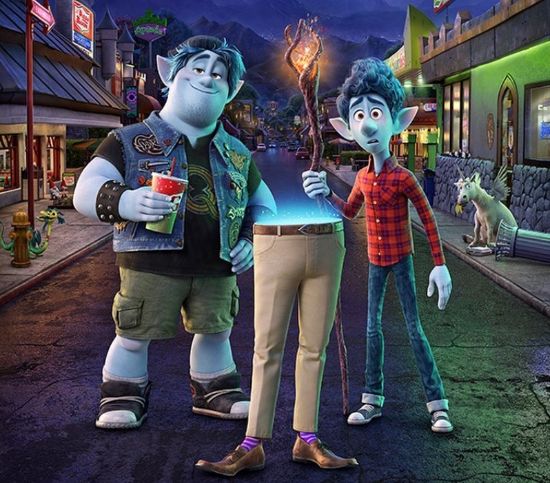 “Magic was real but faded away” is a central theme of most fantasy fiction, from “The Hobbit” on down. Ours was once a world of elves and dragons and unicorns, until technology took over, the magic was forgotten and things got boring.

If only we could recall the wonderment…

“Onward,” the new animated film from the Disney/Pixar, starts from an interesting halfway point. In its universe blue-skinned elves, massive trolls, pixies and other fantastic beasts rule the land instead of humans. But they also misplaced the magic and things grew dull. Until, that is.

The movie is basically a Dungeons & Dragons campaign with a mix of modern and medieval elements. Two elven brothers, Ian and Barley Lightfoot, receive a magic staff from their long-dead father. Cast the spell of “visitation” and dad will return from the afterlife for one day to spend with his sons.

Things go awry and only half of their father reappears -- the bottom half. They’re able to tap out some basic communications with feet but it’s not terribly satisfying. So their quest is to recover a rare Phoenix Gem so they can finish the spell and get their special day to bond.

Ian (voice by Tom Holland), just turned 16, is the shy and awkward kid. Dad died while he was a baby so he has no memory of him at all. His older brother, Barley (Chris Pratt), is twice his size and has 10 times the confidence, tooling around in a beater van he calls Guinevere and an ardent fan of Quests of Yore, the movie’s barely disguised stand-in for D&D.

Ian clearly needs to be more adventurous, while if anything Barley could stand to tone things down a bit. Their mother (Julia Louis-Dreyfuss) quips about Barley setting a record for longest “gap year.” It’s not hard to envision that in a few blinks Barley could become that boisterous middle-aged guy you see in the hobby shop who has lots of passion but no career or family.

Directed by Dan Scanlon (“Monsters University”) from an original script he wrote along with Jason Headley and Keith Bunin, “Onward” has plenty of cleverness and nice throwaway jokes, like the road gang of surly pixies. (Another favorite: unicorns are omnipresent, bedraggled pests that raid your garbage like raccoons.)

They even make a joke about how these types of movies always have a missing parent, by giving us half of one -- and not the meaningful bit.

I liked Octavia Spencer as the Manticore, a once-famous adventurer who now runs a cheesy tourist trap and had to sell her legendary sword, the Curse Crusher, because of tax trouble. She gets around to lending a hand, once the karaoke machine is fixed. Mel Rodriguez voices Colt Bronco, a cop centaur who’s dating the brothers’ mom in between flinging off crusty jokes.

Of course, there is the obligatory “life lessons” stuff that every animated movie aimed at kids seems required to have. (Can’t it ever just be, “Watch a really good story and enjoy yourself”?) Here it’s about cherishing your family and what you have, even as you strive for something more.

It seems Ian is a natural at being a wizard, and with Barley’s help he gradually begins to master each spell in the Quests of Lore manual. If only this were true, I would’ve fireballed my algebra teacher long ago.

Recently my sons and I started playing D&D, or at least our version of it. I haven’t played since the 1980s and don’t remember the rules very well. We take turns being dungeon master, and basically we just tell each other stories and roll a few dice to resolve conflicts.

There’s a refreshing simplicity to “Onward.” (Not to mention being the first non-sequel Pixar feature in three years.) It’s an agreeable middling Disney cartoon feature, and  kids will undoubtedly enjoy the spells and wondrous critters. (‘Ware the gelatinous cube!)

I won’t say it heralds the return of the missing magic, but there are plenty of sparks and few enough fizzles.