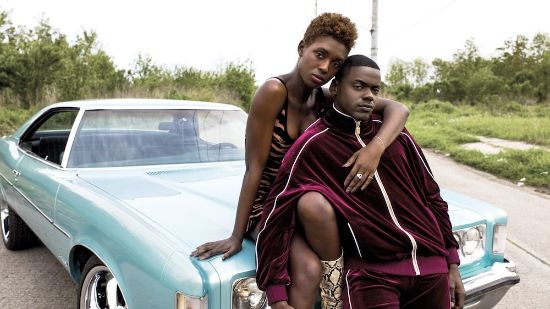 Angela and Earnest only had one date together, but it lasted six days and left an enduring legacy.

That's the story of "Queen & Slim," a powerful drama starring Jodie Turner-Smith and Daniel Kaluuya in a modern-day Bonnie and Clyde tale with overtones of race, power and regret. It's not based on a true story, but has the weight of authenticity as they flee the authorities as virtual strangers and become soulmates along the way.

The movie begins with an all-too-familiar anecdote: a young black couple are driving at night when they are stopped by police on flimsy grounds. The officer (Sturgill Simpson), twitchy and white, orders them around and overreacts to Earnest's complaint that it's cold standing outside while the cop fruitless searches his trunk. Things escalate, shots are fired, and soon they're on the run, labeled as cop-killers.

The movie, directed by Melina Matsoukas from a script by Lena Waithe, diverges from a typical crime potboiler. Angela and Earnest, or Queen and Slim as they come to be known, are not in a relationship. They just finished their first date after meeting on Tinder, and frankly it didn't go very well. He was condescending, she was abrasive, and without intervention they likely never would've seen each other again.

Angela is also a criminal defense attorney, which you'd think would compel her to stop, surrender and let the system of law in which she operates take over. But no -- she knows all too well how the courts are rigged against African-Americans, and it's she who insist they flee.

Eventually they become a media sensation, dubbed Queen and Slim, carrying authorities on a chase from Ohio to Louisiana and Florida. Initially traumatized by their situation, they gradually embrace the experience and their roles as outlaw icons.

At one point Slim asks a young boy to take their photograph in front of their getaway car. They have traded in their looks of benign young professionals for street clothes from her uncle (Bokeem Woodbine), a hostile New Orleans pimp, and look very much the part of hardened criminals. This picture becomes a lesson in how an image can be distorted through its proliferation in pop culture.

I admired the way the filmmakers never quite join in the celebration of the duo, understanding that many of their actions are wrong, and that people have varying reactions to them according to their own beliefs. A black mechanic who fixes their car is indifferent, even contemptuous, while a rich middle-aged white couple (Chloe Sevigny and Flea) offer life-saving help even as they regret the uprising of anger left in their wake.

"Queen & Slim" is both angry and sorrowful, suspenseful and lyrical. We travel along with these two, feeling their sense of doom with every mile. We are hesitant to cheer or condemn them, but just wish their journey would keep going.

Bonus features are ample, starting with a feature-length audio commentary track by Matsoukas and Waithe -- two (or more) are always better than one with these. There are also four making-of documentary shorts:
Movie: