Video review: "The Rise of Skywalker" 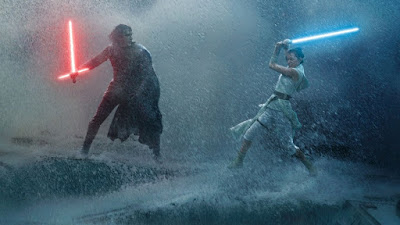 Full disclosure: I’ve never disliked a Star Wars movie. It’s even fair to say on some level I’ve loved everyone one of them. Yes, this includes the hated prequels. And all three of the “sequel” trilogy, culminating with the release of “Star Wars: The Rise of Skywalker.”

This is a grand, energetic, undeniably flawed but also satisfying conclusion to a nine-movie saga sprawling over more than four decades. It relies a little too much on fan service and repackaging characters and story elements from previous films. Yes, it’s a bit lazy (spoiler warning) to recycle Emperor Palpatine as the main villain. On the other hand, he was such a good one that we don’t mind a reprise all that much.

The matter of the parentage of newbie Jedi Rey (Daisy Ridley), which had been teased and argued about, is dispensed with in a twist I doubt many saw coming. The good-guy characters of Finn (John Boyega) and Poe (Oscar Isaac) are relegated largely to the background in favor of Sith hottie Kylo Ren (Adam Driver) and his turbulent relationship with Rey.

It’s part enmity, a little bit romance and not a little ego/ambition.

The first part of the movie is wildly uneven, but they rope it all together for a thrilling second half. There are lightsaber duels, Force fireworks, space battles and all the other hallmarks we’ve loved about the Star Wars saga.

Yes, there is some fumbling storytelling and occasionally hammy acting. This has actually been a feature, not a bug, of all Star Wars movies. But there is also plenty of power and majesty here. Having grown from childhood to middle age with these movies, I’m allowed to both revel in and chuckle at them.

Bonus features are nice, starting with an expansive making-of documentary, “The Skywalker Legacy.” There’s a “creature feature” about the process of creating all the film’s aliens, whether by makeup, puppetry or CGI animation. I appreciated the spotlight on Warwick Davis, who played an Ewok as a youngster and does so again, this time in conjunction with his son, Harrison.

There are also featurettes on creating the landspeeder chase on Pasaana; the history of that strange little blowdryer-looking droid, D-O; and creating the desert world aliens.

A digital-only exclusive with composer John Williams reflects on his amazing body of work for the Star Wars films.