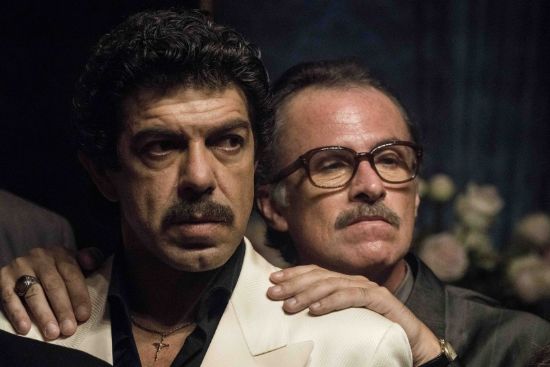 Otherwise known as the Italian mafia or the mob, it has existed in various forms for a long time, and in the movies a bit less so. After the "Godfather" movies life began to imitate art, or maybe it was after the James Cagney films of the 1930s. Mobsters liked how they were glamorized on the big screen and took to imitating the Corleones et al.

As the late, great William Goldman reminded us, the mob we saw onscreen was a cuddly version of the real, malevolent killers who preyed on human weakness like a cancer. There's one scene in "The Traitor" that reminds us of this, where a teenage boy is killed for no other reason than who his father is, but not before chopping off his arm -- just because.

This Italian film stars Pierfrancesco Favino as Tommaso Buscetta -- that's "boo-SHET-a," not "boo-SKET-a," you should know -- the man who is largely credited with breaking the dam of omerta, the code of silence that held back a river of bloody secrets held by the mafia.

His testimony in a variety of trials in the 1980s and '90s resulted in the arrest and conviction of hundreds of mob leaders who had previously been seen as untouchable.

Needless to say, Buscetta became an instant pariah among his former peers. Many of his family members were murdered just because of their association, and there's one astonishing scene where his own sister screams to reporters that her brother should kill himself before he will be forgiven.

You probably recognize Favino from a few American movies like "Angels & Demons" and "World War Z." With his dark, craggy looks and smoldering glare, he's the sort of actor who can play cops or scoundrels, or scoundrel cops, and everything in between.

This is a long (2½-hour) movie from director Marco Bellocchio, who also wrote the screenplay along with four others whose names are too long to spell out. But I never found my attention wandering, even though the first part is largely a bunch of scheming and shooting while the second part is a succession of court scenes and the spaces between them.

As an Italian-American friend of mine once said, mafia movies tend to be just a lot of Italians killing each other and then wailing over their dead children. "The Traitor" certainly has that, but what it's best at is showing us how one loyal soldier felt compelled to break with the mob after 40 years.

I won't get into listing all the real mafia leaders names -- again, all those letters -- but suffice it to say that by 1980, when the story opens, things had changed in Cosa Nostra. Men like Buscetta swore loyalty at a young age and could convince themselves they were men of honor, even as they stole and killed for living.

They were criminals, but had their own rules and code, including such things as never endangering children or women.

By 1980 heroin and other drugs had taken over, and mobsters used to making millions were suddenly looking at billions. It was too much for Buscetta, who decamped his family to Brazil to avoid the constant wars and reprisals.

Maria Fernanda Cândido plays his third wife, Maria, with whom he had several children along with two grown sons, Benedetto and Antonio, from a previous marriage. Think Fredo and Sonny, respectively. They decide to stay in Italy and make names for themselves in the organization, and I don't think I have to tell you what that means.

Fabrizio Ferracane plays Pippo Calo, one of Buscetta's oldest and dearest friends, who urges him to return to Italy and take up the fight against their enemies. Luigi Lo Cascio is Contorno, a fast-talking Sicilian who has a way of making enemies of all the right people.

The other big figure in the story is Giovanni Falcone (Fausto Russo Alesi), the judge assigned to interrogate Buscetta after he was extradited from Brazil. There he had been tortured and hounded for years, without giving up so much as a whisper of information.

But after a couple of sessions with the quiet, probing court officer and the sharing of cigarettes, Buscetta finds himself opening up. He is angry over having innocent people killed for no reason, including those close to him. In his mind, it's the senior mob leaders who have broken faith, not him. His life is forfeit, so why not do something meaningful with it while he draws breath?

Things go from there. I was amused by the raucous Italian trials, where the defendants are locked up en masse at the rear of the courtroom, freely shouting insults at Buscetta during his testimony. Meanwhile he must face forward toward a line of judges (while protected by a bulletproof glass partition) and they essentially trade barbs while rarely making eye contact.

There's a lot of thematic similarities to "Goodfellas" here, as a guy who had been with the mafia since he was a teen finds himself forced to choose between sacrificing himself and everything he loves for nothing, or try to make it count for something.

Favino gives a lovely, layered performance as a man who was far from a saint but had an undeniable sort of bull's courage. Though his name is still spat out in much of Sicily, "The Traitor" bears witness to a terrific true story.

Posted by Christopher Lloyd at 9:10 AM