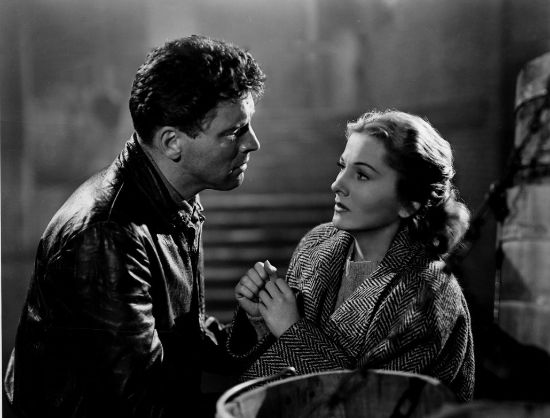 Film noir is to movies what the blues is to music -- it looks/sounds great, but the storytelling isn't always terribly ambitious.

(To the offended blues fans -- I've always felt the wonderful soulful sounds would be better used if accompanied by more than a dozen or so words in the lyrics, rearranged slightly.)

"Kiss the Blood Off My Hands," despite that memorably grisly title, is more or less a forgotten entry in the film noir genre, despite starring heavyweights Burt Lancaster and Joan Fontaine. Perhaps because it's set in London and all the actors except Lancaster speak in British tones, ranging from Fontaine's erudite high-class lilt to the clanging Cockney of the more common folks.

The story isn't terribly meaty, and director Norman Foster doesn't seem to have a good bite on the material. He was a journeyman most known for the "Mr. Moto" series. But it's a fantastic-looking film with some first-rate work by director of photography Russell Metty, full of shadows, slanting light and tilted angles.

It's now out in a gorgeous reissue on Blu-ray from Kino Lorber that shows off its cinematography to wonderful effect.

Metty is one of those quiet legends who worked with many giants of cinema, including Orson Welles on "Touch of Evil," Howard Hawks on "Bringing Up Baby," Steven Spielberg on an episode of "Columbo," John Huston on "Misfits" and Stanley Kubrick on "Spartacus," working steadily from the 1930s to the 1970s.

He won an Oscar for "Spartacus," though he clashed with Kubrick constantly over his slow pace, lighting choices and micromanagement approach to the camera.

Burt Lancaster stars as Bill Saunders, a Canadian (by way of Detroit) ex-soldier who was a POW in a German camp for two years, is still hanging around Europe and in many ways he never really left World War II behind. As the narration sets up, Bill is one of those lost souls who is deeply impacted by the horrors of war and has never truly healed.

The interesting thing is that Bill really is a villain by the contemporary standards of Hollywood movie-making. As the story opens he kills a bartender by accident and then flees from those trying to apprehend him. In the course of the rest of the story he threatens several other people, steals, robs, schemes, pummels a policeman and imprisons Jane Wharton (Joan Fontaine), a humble nurse whose flat he breaks into while on the lam.

There are several scenes that indicate Bill is always just a second away from giving into rage and violence. Jane eventually recognizes this after a budding romance develops between them, and shuns him for a time, mostly owing to finally his actions catch up to him and doing six months in prison.

We wonder if his penchant for brutality will ever turn her way. It seems inevitable, though in the convention of a classic Hollywood film she is the angelic muse who bends his will toward goodness.

At 79 minutes, "Kiss" is based on a book by Gerald Butler, screenplay by Leonardo Bercovici with adaptation by Ben Maddow and Walter Bernstein, with additional dialogue by Hugh Gray. (If you're wondering how to parse what those credits mean and how they reflect each person's contribution, I haven't the faintest.)

The romance is pretty cut-and-dried: after Bill breaks into Jane's apartment and threatens her into remaining silent, he steals a cigarette lighter that belonged to her beau, a soldier who was killed in the war. This is a ruse to give him an excuse to see her again to return it, and he follows her about incessantly, pestering her for attention.

It's only when he suffers a panic attack in the zoo -- flashes from his long imprisonment -- that she starts to feel affection for him. Later on as various threats start to surround them, they talk about running away to somewhere, anywhere, with a ship to Lisbon as their first stop.

Having gotten a job as a truck driver at Jane's hospital delivering penicillin and other sought-after medical supplies, his initial plan is to trade a load of stolen drugs -- hilariously labeled "DRUGS" on the wooden boxes -- to pay their passage.

Lancaster and Fontaine both seem very invested in their roles, though there's a notable contrast in the acting styles. She seems rather restrained in the British way and struggles with her better instincts. Lancaster had a thing for playing men ruled by their passions, an early man/boy screen idol.

Aside from the photography, the best thing about the movie is Robert Newton as Harry Carter, a sort of dandy con artist who spends half the movie trying to enlist Bill as his partner. Harry was present when Bill accidentally killed the bartender and uses that as subtle -- and later not so subtle -- extortion to get him to participate in various schemes.

Bill eventually gives in and agrees to let Harry and his henchman steal the hospital truck, with the proviso that they beat him up to make it look convincing and that he takes no cut from the job. But then Jane decides at the last minute to accompany him on the trip -- her first real outreach to him after their split -- and Bill has to fight off Harry and company off instead.

Harry's big scene is where he drops in on Jane unannounced professing to be a friend of Bill's, and he gradually turns from ingratiating fop to nefarious kingpin all in one scene, the camera leering at him in fish-eye lens closeup as he threatens her. She gets the better of him with some sewing scissors, fearing killed him, and it's up to Bill to clean up the mess.

There's another terrific scene near the end where Jane, hiding out in Bill's apartment, starts to feel her mind unravel. Metty appears to use a dolly shot -- rare in those days, especially for indoor scenes -- with a distorted lens following her as she walks, the angles morphing like a tilt-a-whirl. Brilliant.

"Kiss the Blood Off My Hands" ends on the barest of hat tips to morality codes of the day. With Harry dead, a truck full of drugs in their possession and no police on their immediate trail, Bill and Jane decide at the last minute -- quite literally, the last minute of the film -- to instead turn themselves in and face the consequences for their actions.

Bill had already gotten away with manslaughter, and doesn't seem to have much qualms about his other acts, which include beating and robbing a rich man in a tuxedo in a darkened alley. So it registers as a cheap conversion tacked onto the movie.

It would be easy to imagine if this film was made in the 1970s instead of the '40s that Bill would be a complete anti-hero who relishes inflicting pain and Jane is the upstanding woman who falls, literally, for his bad boy ways.

Overall I think I'd rather see that movie than this one, though the gorgeous black-and-white photography is the main reason to give "Kiss" a look.