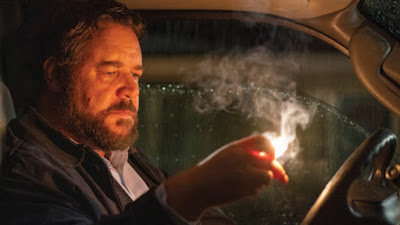 It's been said that all movies are on some level manipulative, but some more so than others.

Russell Crowe plays Tom Cooper, a bad man having a bad day. His main difference with Michael Douglas' character in "Falling Down" is that he has no illusions that he's the bad guy. Tom feels he has been screwed over by everybody in his life and is ready and even eager to return the favor.

I've cracked jokes about Crowe's weight gain in recent years -- "the actor who ate Russell Crowe," as I recall -- but have to admit his size works for him here. Tom seems like an obdurate bison, lumbering around his little patch of turf, ready to charge all comers even if it isn't particularly worth of defending anymore.

(Crowe has done more press interviews in the last year than he did in the previous 20. He seems jovial and happy -- maybe I should just be happy for him?)

Director Derrick Borte ("The Joneses") and screenwriter Carl Ellsworth ("Disturbia") thankfully do not make any motions to defend or empathize with Tom. He's the dastardly villain and there's no two ways about it. Rather, Crowe uses his performance to explore the outer boundaries of rage -- how it resides in all of us, and what happens if an ordinary person decides to abandon any sense of altruism.

The main character is Rachel, a harried mom played by Caren Pestorius with tremendous emotional relatability. She's in the middle of going through a divorce, has her loser younger brother, Fred (Austin P. McKenzie), and his girlfriend (Lucy Faust) on permanent crash at her place, and is trying to keep a modest little trade as a hairstylist in the black.

As her day opens she is just trying to get her son, Kyle (Gabriel Bateman), who's about 10, to school on time in the rush-hour traffic. Tom has just had a major life event -- which I'll not reveal -- so when he tarries at a green light and Rachel lays on her horn at him, something snaps.

Actually, it's not this mild clash that provokes Tom, but Rachel's refusal to return his offered apology. Soon he's following her around in his malevolent gray truck, smashing into her Volvo's bumper and trying to run her off the road. The rest of the story plays out as a real-time action thriller, as Rachel tries to outmatch this seemingly unstoppable force that has decided she is the enemy.

It's not hard to see the subtext going on here. Tom is an older white dude who feels the world is not giving him his proper respect -- he even has a gentlemanly Cajun accent. And here's this mousy little woman defying him who must be taught a lesson about "what a bad day really is."

He's The Patriarchy, made (ample) flesh. (Sorry, last one.)

Both Tom and Rachel speak to a lot of constituencies right now. She's a beleaguered woman trying to last through a long slog of suck beyond her control and feels like nobody has her back. He's an emblem of a fading entitlement who deludes himself into believing his recent struggles give him rights to impose his darkest impulses on others.

It's interesting that the filmmakers didn't impose a racial animus element, especially as the story is set in the very multicultural city of New Orleans. Though that sort of thing is dicey these days, to say the least. Might as well put a MAGA hat on Tom and watch the newly-reopened theaters get picketed.

"Unhinged" has both reactionary and woke facets to it. It recognizes that everyone has a mad animal lurking inside of them and it's best to never let it out. Little nuggets of antipathy -- say, a nasty comment or tweet -- can lead to bigger reverberations. The problem with letting the beast out is we may never catch it, spreading his "always on" anger wherever he goes.

Would you want to live in that world? I wouldn't. But sometimes I fear we already do.

A P.S. from Your Friendly Neighborhood Movie Critic: "Unhinged" is the first major release in theaters in five months, and it's no exaggeration to say an entire industry's future hinges on how we do. If you think that cinema is best experienced in, well, a cinema, then please be smart if you go. Wear a mask, follow the rules and socially distance. Because a world where all new movies arrive on our phones rather than the local theater is a dreary place.


Posted by Christopher Lloyd at 3:00 AM