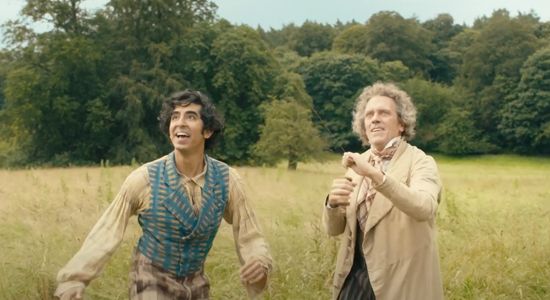 I admit I haven't read a lot of Dickens; like a lot of people I associate him with long, dreary tales of woe. "It is a far, far better thing" and all that. He sort of gets stuck in that continuum of “stuff you were made to read in school.”

Yet here is an adaptation of perhaps his most famous work that is full of light and color and joy. "The Personal History of David Copperfield" does some modernized tweaking of the story, but really it's the perspective that has shifted.

There are still untimely deaths, and pitiful poverty, and hissable evildoers, and unhappy marriages, and all the other attributes of Charles Dickens' semi-autobiographical tale. And yet director Armando Iannucci, who co-wrote the script with Simon Blackwell, manages to mold all that into a vibrant, upbeat story about perseverance and hope.

Jairaj Varsani plays Copperfield, a scrappy young boy raised in a home where he was showered with attention and love, including his widowed mother and beloved maid, Peggotty (Daisy May Cooper). Then he is mistreated by his new stepfather, Murdstone (Darren Boyd) and his sister (Gwendoline Christie), and eventually sent away to work in a wine bottling factor as a child laborer.

At this point Dev Patel takes over the role, as his fate and the name he is called continually change. For awhile he is a proper gentleman, supported by his wealthy aunt (Tilda Swinton), who insists upon calling him Trotwood, her married name. He goes to school with upper crust boys, fearful of his sordid past being found out by the likes of Steerforth (Aneurin Barnard), a snobby but charming sort who calls him "Daisy."

Later he becomes an apprentice proctor, which is a sort of lawyer (though Dickens, who himself was one, admits he never did figure out exactly what sort of law they practice). He becomes entranced by his boss' daughter, the daft but harmless Dora (Morfydd Clark). But then things come crashing down when his aunt loses all her money and Davis is faced with returning to the squalid ways he thought he'd left behind.

Let's stop a moment and talk about the mixed races of the cast. Dickens was, of course, a Brit and the characters in his books were overwhelmingly in the pale spectrum -- as was England in the 19th century. So what's going on with an Indian in the main role? And folks of African, Asian, Latin, and seemingly every other ethnic heritage bobbing all about as if this was any kind of accurate representation of the place and time?

I'm sure it will bother some people, but it doesn't me. The film aims to be a celebratory, colorful version of Dicken's novel, and that is deliberately extended to the hues of the people as well.

There purposefully isn't any rhyme or reason to it, so for instance all of David's relations are white even though he's a lovely deep brown. And Mr. Wickfield, the humorously drunken lawyer who is a friend to his aunt, is played by Chinese actor Benedict Wong while his daughter, David's best friend Agnes, is portrayed by a black Brit, Rosalind Eleazar.

Strangely we have reached a point in our societal (d)evolution where people from the extreme wings of both ends of the spectrum would object to this casting, one calling it racism and the other calling it cultural appropriation, though they both end up meaning pretty much the same thing.

They can all sod off.

Back to the movie. There are some really terrific supporting performances, starting with Tilton, whose Mrs. Trotwood is somehow both extremely rigid, furiously chasing donkeys off her property, while also being persuaded to listen to her inner heart. Her companion, Mr. Dick, is played by Hugh Laurie as an addled, nervous wreck who can be a genius when he settles down long enough for his mind to calm. He is convinced that the thoughts of King Charles I invaded his own after his execution, never mind that it happened two centuries earlier.

I also quite enjoyed Peter Capaldi as Mr. Micawber, an itinerant huckster who was David's landlord when he was a boy in London. Micawber owes money all around town, and most of his time is spent dodging collectors using trickery and disguises. He turns up again in David's life in college and thereafter, still grifting but somehow eternally occupying a warm place in his heart.

(Not surprising, considering Micawber is supposedly based on Dickens' own dad.)

Ben Whishaw makes an impression as the irrepressible Uriah Heep, a servant at David's school who is famous for his cloying, obsequious manner. Like Macawber he turns up again later in the story, though to no credit of his own.

The story moves along at a pretty good truck, and rather than risk getting sunk into the many subplots and characters of the book, the filmmakers choose to dance upon the lily pads above them. Don't feel bad if you can't keep track of everyone's names -- I had to look them all up in writing this review, with the exceptions of Copperfield and Heep.

This version of "David Copperfield" is so enjoyable, in fact, that I'm tempted to take another crack at the book.

Posted by Christopher Lloyd at 9:13 PM