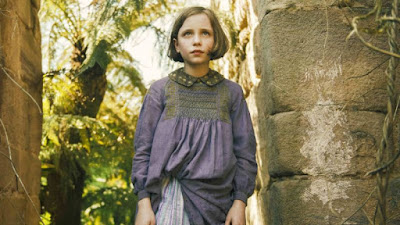 What a beautiful film.

And I don't just mean the visual splendor of "The Secret Garden," which is considerable. No, I mean what a lovely portrait of broken people attempting to put the pieces back together. Here is a movie that is sad but also hopeful, that recognizes terrible things happen and people often react to them in unhealthy ways -- but everyone still retains a chance of redemption.

The novel by Frances Hodgson Burnett, about an orphaned British girl sent to live with her reclusive uncle after World War II, was previously turned into a 1993 movie directed by Agnieszka Holland (seen by me but, alas, little remembered). Jack Thorne wrote this adaptation, which was directed by Marc Munden.

It's a film of bright colors and deep shadows, of pessimism and regret, but also light and grace. Dixie Egerickx is a revelation as Mary Lennox, a smart girl living in India whose parents died of cholera. She loved to tell stories and invent characters, but was tormented by a mother who seemed distant and uncaring.

Egerickx has an immediacy as an actor you rarely see in child performers; she seems always very much in the moment. The words that come out of Mary's mouth feel like they have just spontaneously formed there, rather than something a kid is trying very much to read.

Colin Firth plays Lord Archibald Craven, a lonely widower living in a massive castle (at least us Yanks would call it that) called Misselthwaite Manor. Once a grand place, it's fallen nearly into ruin. Lord Craven has a hunchback and spends most of his time stewing in his study or throwing away things that remind him of his dead wife.

Mary is soon ensconced in one of the many rooms, left virtually to herself by Mrs. Medlock (Julie Walters), the stern sergeant-at-arms who runs all of the household affairs. She stomps about the halls with clanking keys and a set frown. Mary doesn't even get to meet her uncle for a few days, exploring the vast overgrown estates and meeting a stray dog she soon befriends.

She eventually learns that she has a cousin, Colin (Edan Hayhurst), who is sickly and cries all the time. And she meets Dickon (Amir Wilson), the younger brother of Martha (Isis Davis), the maid who shows Mary some of the only kindness she encounters. Dickon is sort of a feral boy wandering the foggy moors, and becomes Mary's guide and companion.

The biggest discovery is, of course, the garden, which used to belong to her aunt but has been locked away behind a high wall and left to rot. It's a place of magic and mystery, helped by lovely CGI as plants seem to grow their branches toward her in friendship and birds and other creatures nudge her toward secrets and clues. As she and Dickon spend more time there, the garden starts to revive and bloom.

Mary becomes convinced that Colin will be healed by his mother's garden, if only she can finagle a way to get him into his wheelchair and outside. He's a stubborn nut, desperately lonely but also resentful of Mary's presence. Meanwhile, Mrs. Medlock is closing in with her spying and interfering, intent on seeing that Mary is sent off to a boarding school and out of her uncle's hair.

Maeve Dermody and Jemma Powell play Mary's mother and aunt, respectively, who speak no words but acts as a kind of peaceful, ghostly presences, lingering around Mary's memories and visions. Initially haunted by her memories of her mother, Mary starts to accept the idea that the sadness that kept them apart was not her fault.

At its heart, "The Secret Garden" is a story about pain. We needn't shut ourselves off from pain, it insists, because pain is inevitable and most be felt in order to be endured and eventually overcome. It's a lesson grownups spend their whole lives trying to learn, let alone children who have been orphaned.

There is beauty in this message and this film, which seems both timeless and timely.

Posted by Christopher Lloyd at 5:02 PM