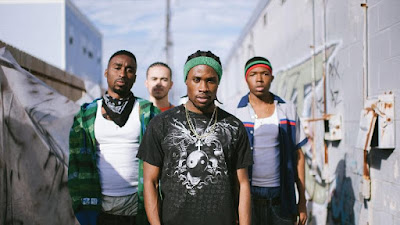 "Cut Throat City" is a grim and grating tale of crime and despair. Set in New Orleans in the aftermath of Hurricane Katrina, it spins the story of Blink, an aspiring comic book artist who turns to the gang life in order to get his family by. Over the course of the next two hours he descends into his personal heart of darkness, encountering increasingly depraved souls -- and risking the state of his own.

Blink is played by Shameik Moore, a young actor I've had my eye on for awhile. He had a terrific breakout in the criminally under-seen "Dope" five years ago, and was the lead voice actor on 2018's hit "Spider-Man: Into the Spider-Verse." He's got a sly sensitivity to him, and in his portrayal of Blink we see a kind soul who must harden himself to the harsh conditions surrounding him like a shroud.

Blink winds up doing some pretty terrible things, and yet we never glimpse in him a person who revels in these acts -- unlike some other, contrasting figures we'll meet.

"Cut Throat City" is overtly a morality tale, looking at the largely Black community in the Lower Ninth Ward, which was flooded by the storm and then allowed to fester in a fever of drugs, unemployment, abandonment and despair. To Blink, the levees breaking was just the latest act in a long history of being ignored and put down by the government.

It's a solid crime saga with a real social bite to it.

The film is directed by RZA, best known as a rap artist with the Wu Tang Clan but who has increasingly turned to moviemaking, including two previous features (unseen by me). He already shows considerable skill as a storyteller, and has an intrinsic feel for how to get actors to be their most present in a scene. RZA is also good at knowing when to hold a moment a beat or two longer, and when to move on.

The screenplay by P.G. Cushieri, his first feature, isn't nearly as tight as it could be, especially in the second half as we keep introducing new characters that probably aren't necessary to the story. But the ones we do encounter are sharply drawn, and the dialogue has the authentic crack of people who have made their life on the streets and have little patience for sophistry.

"Cut Throat City" also boasts an amazing supporting cast of name actors: Ethan Hawke, Isaiah Washington, Terrence Howard, Rob Morgan and Wesley Snipes among them. Snipes in particular has terrific presence as Blink's absent father Lawrence, who he must turn to in time of need.

Bald, his chin tucked to his prodigious chest and teeth clenching a pipe, Lawrence ambles around his poor shack in the swamp like an exiled king. Here is a man who knows the costs of his mistakes and would impart those tough lessons to his son.

After a career of ups and downs, it's nice to be reminded that Snipes has serious acting chops when he given a chance to use them.

The story starts with Blink's wedding to Demyra (Kat Graham), then flashes to the time after Katrina. Blink is rudely rejected for an artist job, but they don't qualify for FEMA assistance. With the bills piling up, he and his best friends figure they'll try a heist to get them a boost. Of course, the "one job" becomes a downslide to increasing violence.

This means aligning with Cousin Bass, the local head gangbanger (who actually is Demyra's cousin, but everyone calls him that). Cousin is a pure feral creature, concerned with making money and inflicting pain. Chillingly played by musician T.I., he has (ersatz) vertiglio patches on his face that make it seem like his skull is trying to shrug out of his skin.

Blink's crew are Miracle aka T.C. (Demetrius Shipp Jr.), a low-level drug dealer with a temper; Andre (Denzel Whitaker), the quiet, kindly one who plays trumpet; and Junior (Keean Johnson), the white kid who embraces Black culture and is accepted as part of their little tribe, though with a little trash-talking banter.

Their job, ripping of a casino -- seemingly the only legitimate businesses growing in New Orleans -- goes south and they find themselves on the run, caught between Cousin and the cops. Eiza Gonzalez plays Valencia, the stiff-necked detective on the case. And Ethan Hawke shows up as Symms, the corrupt city councilman who's drowning himself in drink and mourning his dead wife, and trying to do the right thing... possibly for the first time ever.

The story loses steam between the second and third acts, as the number of side characters and plots builds up and threatens to upend the weight of Blink's journey. Morgan plays Courtney aka Cowboy C, another local crime boss with an ace up his sleeve; Isaiah Washington is Sinclair, the slithering and perpetually smoking funeral home director; and Howard turns up lat as the Saint, a mysterious figure who seems to live in an old church and is said to be pulling everybody's strings.

There's a lot good things going on in this movie. There are too many extra pieces to the puzzle and the film could easily stand to be 15-20 minutes shorter. (A comment lament I have these days.)

But there's undeniable energy and verve here. Watching "Cut Throat City" feels like a journey into its own little universe where there are no good choices and the rules of fair play have been washed away.

Posted by Christopher Lloyd at 1:36 PM